Myths and misconceptions aside, bats are astonishing animals. They are the only true flying mammals. Unlike "flying" squirrels and "flying" lemurs, which merely glide, bats are capable of powered flight. And they are remarkably adept at it, surpassing in many ways even the considerable skills of birds. A bat flying at 40 miles per hour can make a right-angle turn in little more than the length of its body.  That means one thing to me...GET THE H...OUT OF THE WAY!!! 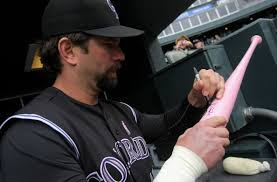 
Lastly,  here is my favorite role model of them all (j/k) ...the one, the only..."Batgirl" herself!!
Extra bat points for watching...