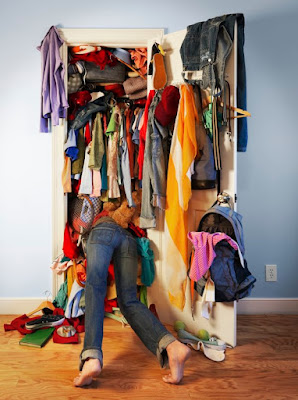 So often times, we find ourselves sifting through a mess to find one little thing.  It could be that size AAA battery that you thought was in the junk drawer or that one size 18 pheasant tail that you know is in the bottom of your pack somewhere.  Why do we lose these little things?  Because we didn't put them in the right spot in the first place.  They should have gone into a container or box.  Not loose with everything else.  I have found myself in this situation way too often.  So, it is time to declutter and simplify again.  When it is too hot to go outside and fish, I often opt for cleaning out my fly fishing pack and organizing things.  That way, I am ready to go out next time.  I just hate it when I cannot find something and waste time looking for it.  Same goes with my closet.  I just have too much of everything!  Here is what I propose.  And you can join me if you wish... 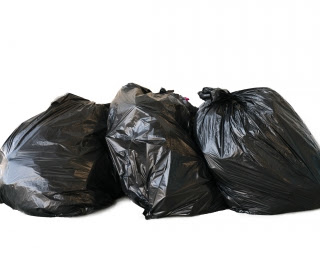 A couple bags a week)

Okay.  You can start with smaller bags, but fill one trash bag each day.  Maybe a kitchen size if you want to go smaller.   Now go to one section of the house and start throwing out what you really have not used or worn in a long time.  Why are you holding on to it?  Do you think that you might fit into that pair of pants next year?  I recently bagged up clothes that have sat for a few years.  It just makes sense for someone else to get some use out of them.  Donate!!

When you declutter and simplify your belongings, you have more space.  You also have more peace of mind and less anxiety about where things are.  You can now organize the more important things that remain.

Take a breath and look around.  It will feel great.  I promise.

Have a great week! 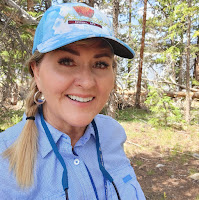 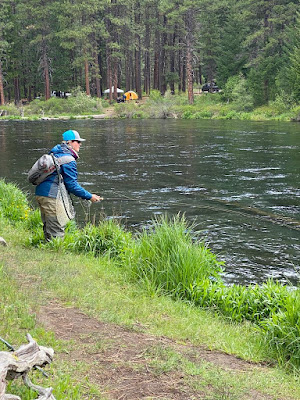 Usually when I venture out on a fishing trip, I pretty much know what to expect.  Especially, if I have been there before.  There usually aren't too many surprises.  I have done my homework on the selected river and usually have the box of flies that will get the job done.  Of course, there are those variables like weather and moon phases. (Yes, I do have strong feelings about a full moon the night before)  When I packed for my trip to Oregon, I just threw my boxes of flies in the suitcase and hoped for good intel from my friends who lived there.  I was going to a place that has the reputation for being very finicky and difficult to those that visit for the first time.  Or the second for that matter!  So, I would have to rely on "Lady Luck" to catch just one fish.  And I would be forever grateful for that one fish... Whatever it may be.  A redband trout, brown trout, whitefish or a coveted bull trout live in this crystal clear, 45 degree avg cold water of the Metolius River! 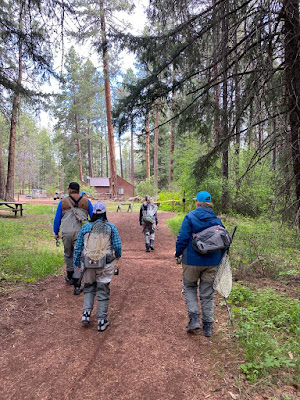 I am a realist.  It's fun to dream, but I don't like disappointment.  So, I just told myself that any fish caught would be a win!!!  Truth be told, I just wanted to see one of the prettiest rivers in the nation.  The Metolius River has been on my radar for about 4 or 5 years.  I have seen pictures and have heard amazing stories from those who have been there.  It was time to see this "Heaven on Earth" that has fly fishing only sections and no commercial guiding.  My skills would be tested.  But heck, if you don't try, you will have regrets later.  So, Dan and I stayed over with my besties, Alice and John, after the day of crabbing.  Ha!  Try getting up the next morning to fish after having a 5 course meal at 9 pm!!!  We would meet up with our friend Jessie, who would travel down from Bend.  I hadn't seen her in quite a few years and was excited for the reunion.  Down the trail we went, excited and anxious to see what we could find.  Would there be any chance of a bull trout that had escaped me in Canada a couple of years ago?  The Metolius allows for you to target the bull.  Not all rivers do.  They must be caught and released though, as they are endangered.  My bucket list char would be a long shot at best. 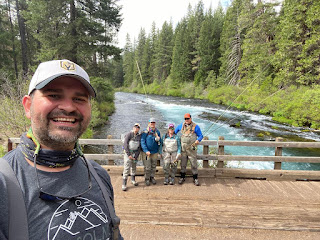 Another part of this adventure was to get my son, Dan, his first fish on the fly.  I had great people around me that could help with this.   I brought two sets of everything with me on the plane. Lol.  He was excited to try.  I will get my two boys into this sport before I retire from it!!! Someone needs to inherit one thousand errr... a few dozen flies and all the extra "stuff" in my gear box! 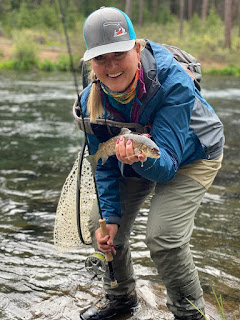 On my third cast, I had a fish!  A sweet, little whitefish.  Whew!  The Metolius curse was broken.
I could relax now.  Haha.  Alice was in disbelief and with her eyes rolling like...
"Emily did it again".  Lol.  Lady Luck was with me, that's all I can say.  I was really expecting to go half a day without anything.  A few more casts and I had another whitefish. The "Queen of Whitefish", that's me!!  I was kind of hoping that it would have been one of those Redbands that I had heard about.  Well, I put out a few more casts.  And on about my tenth cast in this intimidating river, I had a another hook up on the end of my line.  Jessie, Alice, Dan, and John were above me on the bank looking down.  They started screaming!  "You've got two big bull trout chasing after your whitefish that you have on"!!!   Bull trout are very verocious predators.  I was shocked!  Was it finally going to happen?  I missed getting that bull trout that followed my cutthroat in Canada.  But, I had hope as Jessie scaled down the bank to try to net these fish for me.  I had an expert netter.  I kept my line tight and with very careful precision, brought the fish away from a fallen tree in the river.  Ugh...  We did not need any extra complications!  One of the bull trout latched on to the whitefish.  Reeling got tougher.  My arm was about to give out.  But, no pain, no gain.  Right???  Just keep going!  After a few more minutes, Jessie put out the net and with a swoop, I saw two fish jumping in it!!  My first reaction... 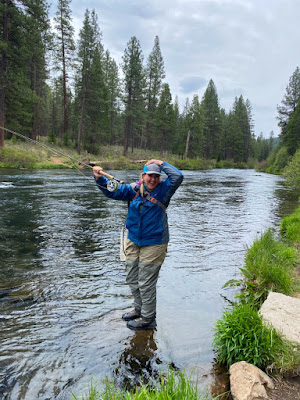 And the peanut gallery hooted and hollered.
Oh, and all Alice could say was, F-n Emily!  I think that was Frickin. =)
(I might have brought some magic in front of her before on a river.)
We have so much fun going back and forth.  Haha. 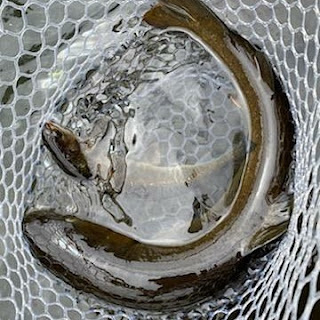 Believe it or not, the whitefish was ok.
He gave me a few wiggles and smiled as he swam away.  Lol. 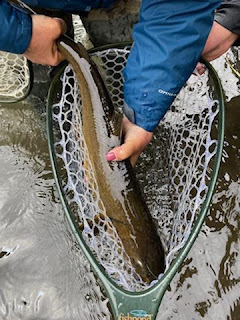 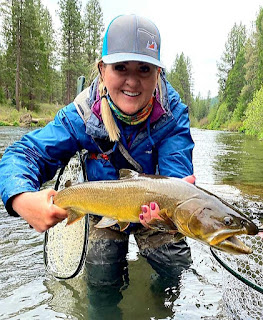 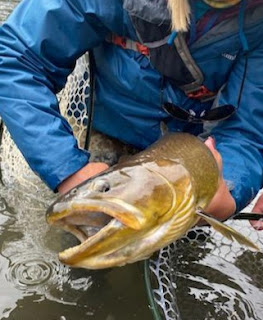 Off the bucket list!  Hallelujah!!
It will always be one of the most incredible moments in my fly fishing journey.

Now....  It was time to get Daniel on a fish.  We moved down the trail to another spot and I asked Jessie to give him a mini lesson on roll casting.  He was a natural.  He picked it up quickly.  The rest of the gang went on down to the next stretch as I stayed back with Dan to cheer him on.  We were on a good corner.  I knew that it was just a matter of time.

He caught his first two fish in that corner!!!  It made my heart happy.
He spoiled me so much on this trip and I was glad the river gave it up to him.  Who would think that the same fly that I use on my home water would catch all of our fish...
And it was my tied fly.  Bonus. 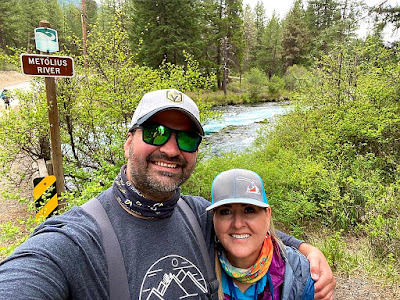 I don't usually get to share my river days with family.  So, it was extra special to have Dan with me on this adventure and for him to meet my "Friends of the Fly".
It was a great weekend all around. 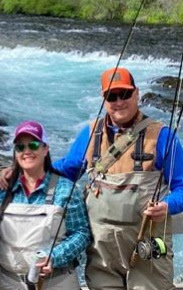 Special thanks and much love to Alice and John for giving us a fun filled two days in Oregon!
The crabbing was a once in a lifetime thing for me and the bull trout will probably be too!  Haha. 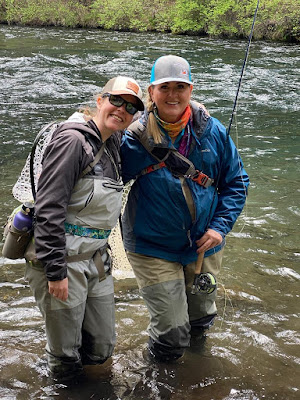 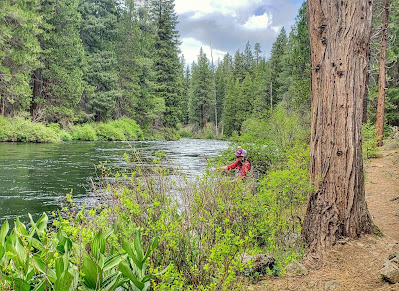 Posted by THE RIVER DAMSEL at 8:16 PM 8 comments