Bringing In The New Year

December is over.  The hustle and bustle of shopping days, preparing meals and cleaning the house for parties is over.  We are now in January, which is often colder and much more quiet.  I find myself excited about that new diet (hahahahaha) and making plans for future fishing trips this year.  But, most of all... I am grateful that I have a job that I enjoy so much, decent enough health if I follow the doctors orders, and a wonderful family that I love so much.  I want to share with you one of my favorite Christmas presents... 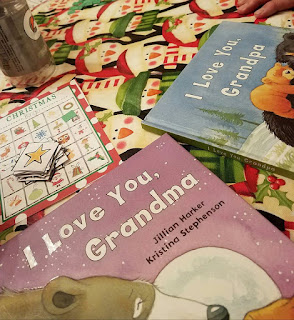 The news of a new grandbaby was pretty exciting!  This will be our third grandchild and the first baby for
Ryan and Zoe who got married last May!

So, the fishing sort of slowed down during December and so did the blog.  Haha.  How does that happen?  Probably because I had an ongoing problem with the inside of my casting elbow.  First, I thought it was from fly fishing.  But, then it dawned on me that I have never had pain in my arm for the last seven years.   Why would it start now?  Then, I remembered the shoveling of several massive storms.  Anyway, feeling much better from resting it.

So January started with an annual event of our local Trout
Unlimited chapter, the Stonefly Society.  This outing happens on the first Saturday of each new year.  It's called...

FYAO
or
Freeze Your Everything Off!

We started with breakfast (that wasn't long enough)...  Heck it was zero degrees at 9:00 am still!  So, I released my fishies from the net quickly and just took one photo as proof for the "judges"!  Haha 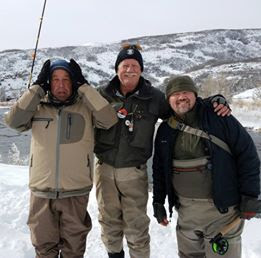 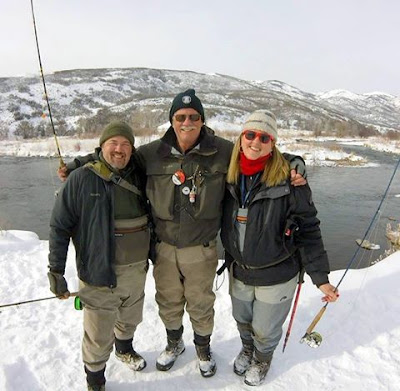 Hey, it's the Three Amigos!  Nice of Ernie to come down every year from his Idaho
"Lazy Boy" recliner with that electric blanket over his lap...  Haha 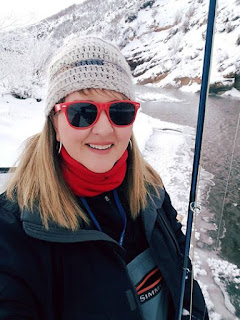 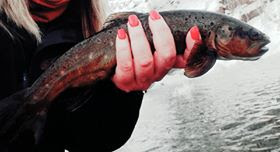 So, before we get all giddy with our resolutions of the new year, lets look back as we always do, to the past year of
"good things fly fishing"!!

Thanks to all of my followers of the blog.  Without you, it wouldn't be worth doing.  =)
Much love!!