Ode To The Thin Mint What I'm wanting are more of these...
The Thin Mint Wooly Bugger 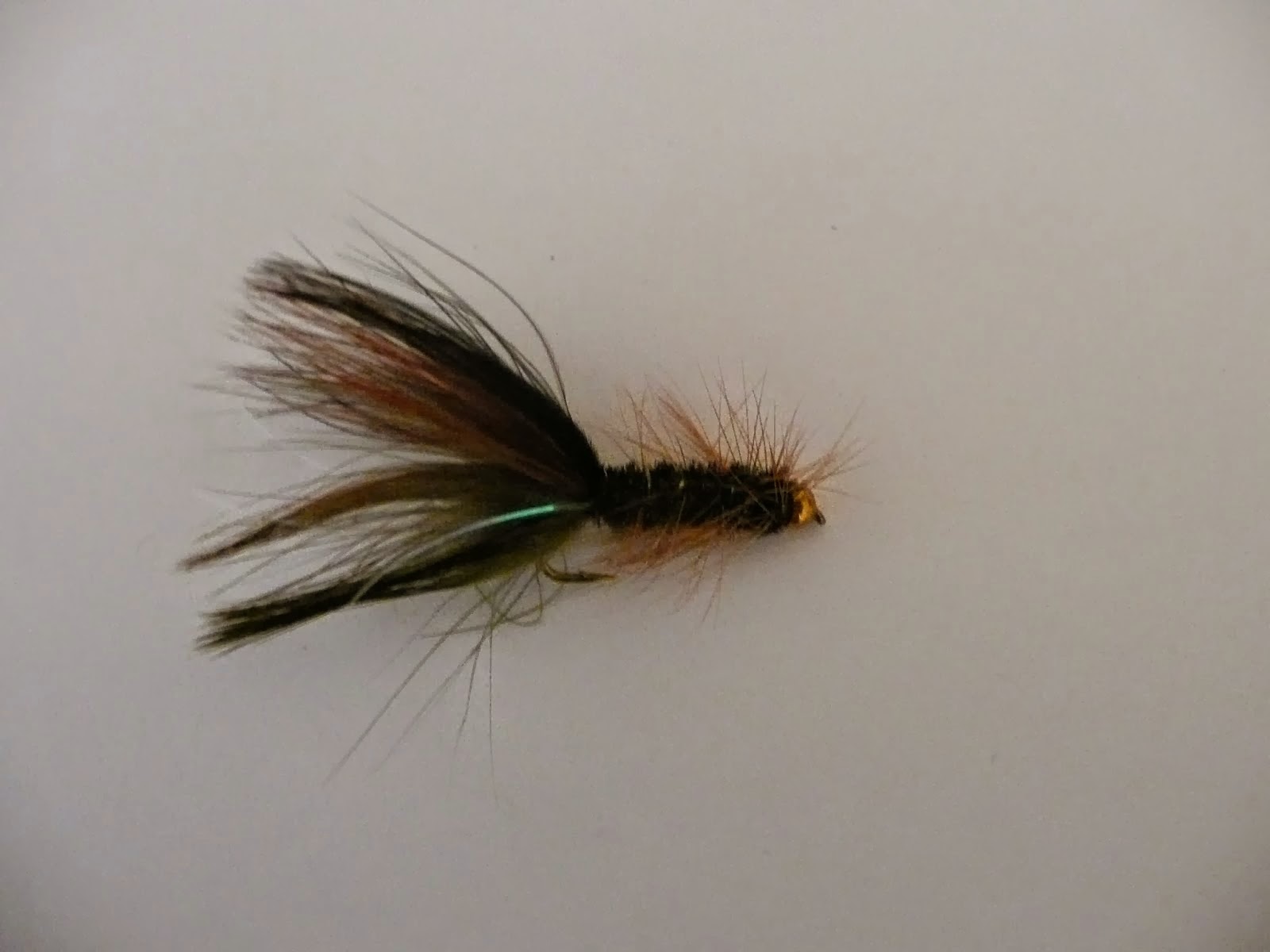 You see, I took the two that were sent to me from my friend Mark, over at Northern California Trout... and went out on an adventure. 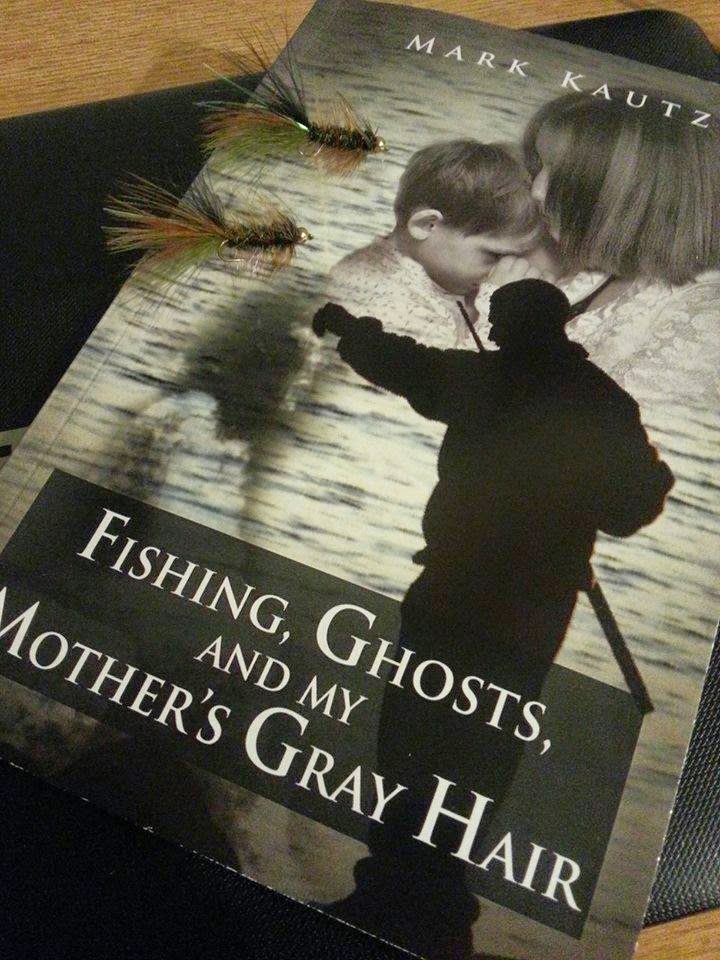 He had a post about the Thin Mint Wooly Bugger.   I asked him about them and wanted to tie some up.  His recipe for them is in the post.   He was so nice to send me a couple of Thin Mints, along with his book.  I don't know too many authors.  =)

So, we headed to the river recently, with the Thin Mints in tow.   I was throwing small midges and sow bugs for the first little while.  The fish were in there.  I knew they were.  But, no bites as of yet. Then, it dawned on me, that I should try the Thin Mint as an attractor and see if they would take the Thin Mint or maybe finally take the midge dropper. 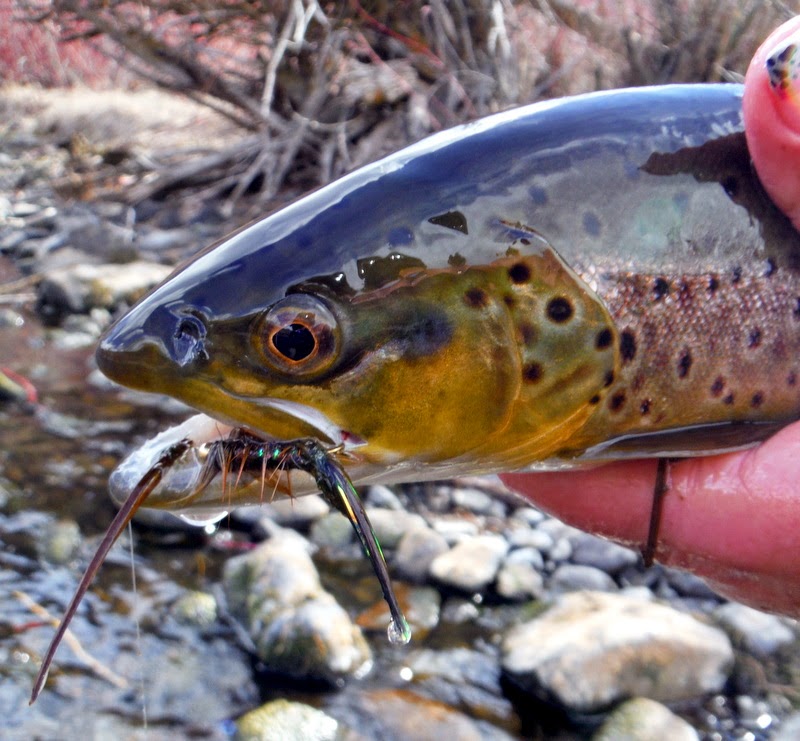 Yeah, you get the picture...

Then, all of a sudden, I was hitting on the midges underneath the Thin Mint.  A great attractor pattern too!  Ok.  So, I moved downstream and put my hat on right (realized that I looked like a dork the way I was wearing my double layer hats!  Haha. 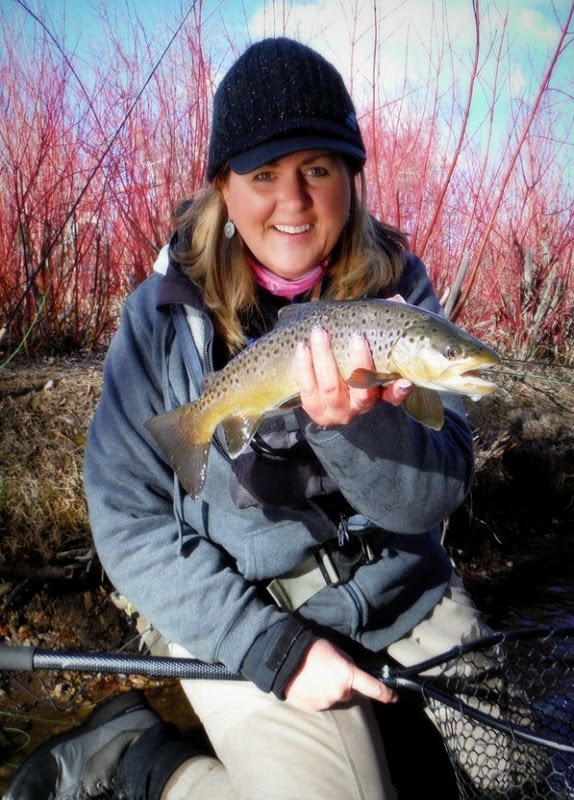 And the fish didn't really care how I wore my hats... They just wanted that Thin Mint to be on my line.  And some very good outings since... Thanks, Mark!

I have the materials now and we will make up a batch.
Oh, did I have to say that word???  Now I want some Thin Mint cookies.  Well, I only have this recipe...

Now and again, I find that I am the forever student.  The river is never the same, the fish are never the same in what they want to eat, and the weather is never the same.  Case in point...  I just got back from Colorado.  I went on a quick weekend trip with my friend Lisa.  We looked at the weather forcast for two different places.  Then, we checked out the fishing reports, along with the river flows.  There were pros and cons on each.  In the end, we decided to go to the colder destination instead of the warmer.  Due mostly to the hotter fishing that was going on and a higher than normal winter water flow.  Well, so much for our 30%, then 40% chance of snow. 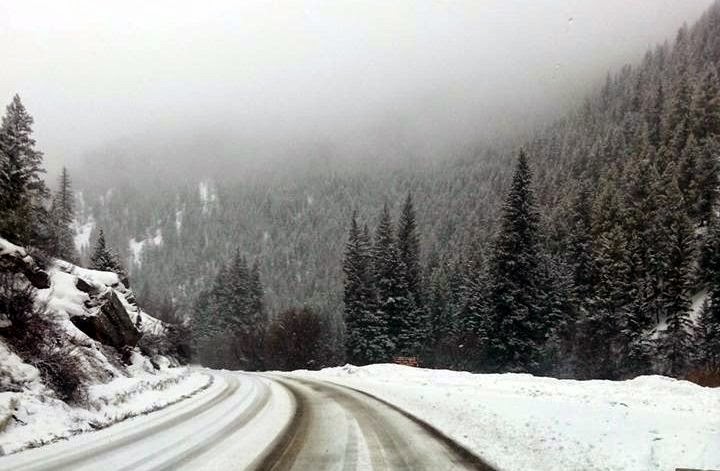 The warm spell that the West had been experiencing the week before, well... ended.  Just in time for our arrival!  Of course!  The barometer dropped as well.  But, we were determined to still have a good time and make the most of it.  Hey, at least the accomodations were perfect for the weather.  I picked a winner of a hotel.  A nice hot tub awaited each day after being out in the elements.  And the breakfast was way better than any other continental breakfast that I have ever had.  All for the low, low price of $55.  I know how to pick em'...  =) 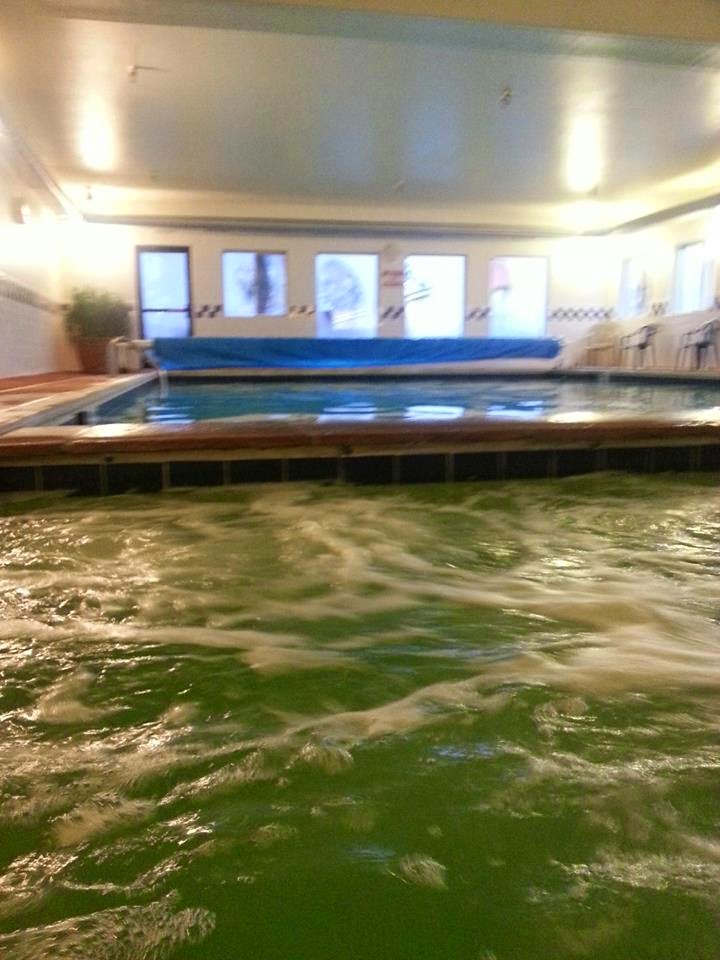 So, what about the fishing, you ask?  Well, it was average.  The storm blew through and the one full day of fishing was the snow day.  And the wind day.  But, there were still at least a half dozen fish for each and we were smiling at the end of the day.  Well, sort of.  Yeah, Lisa really did have fun... =) 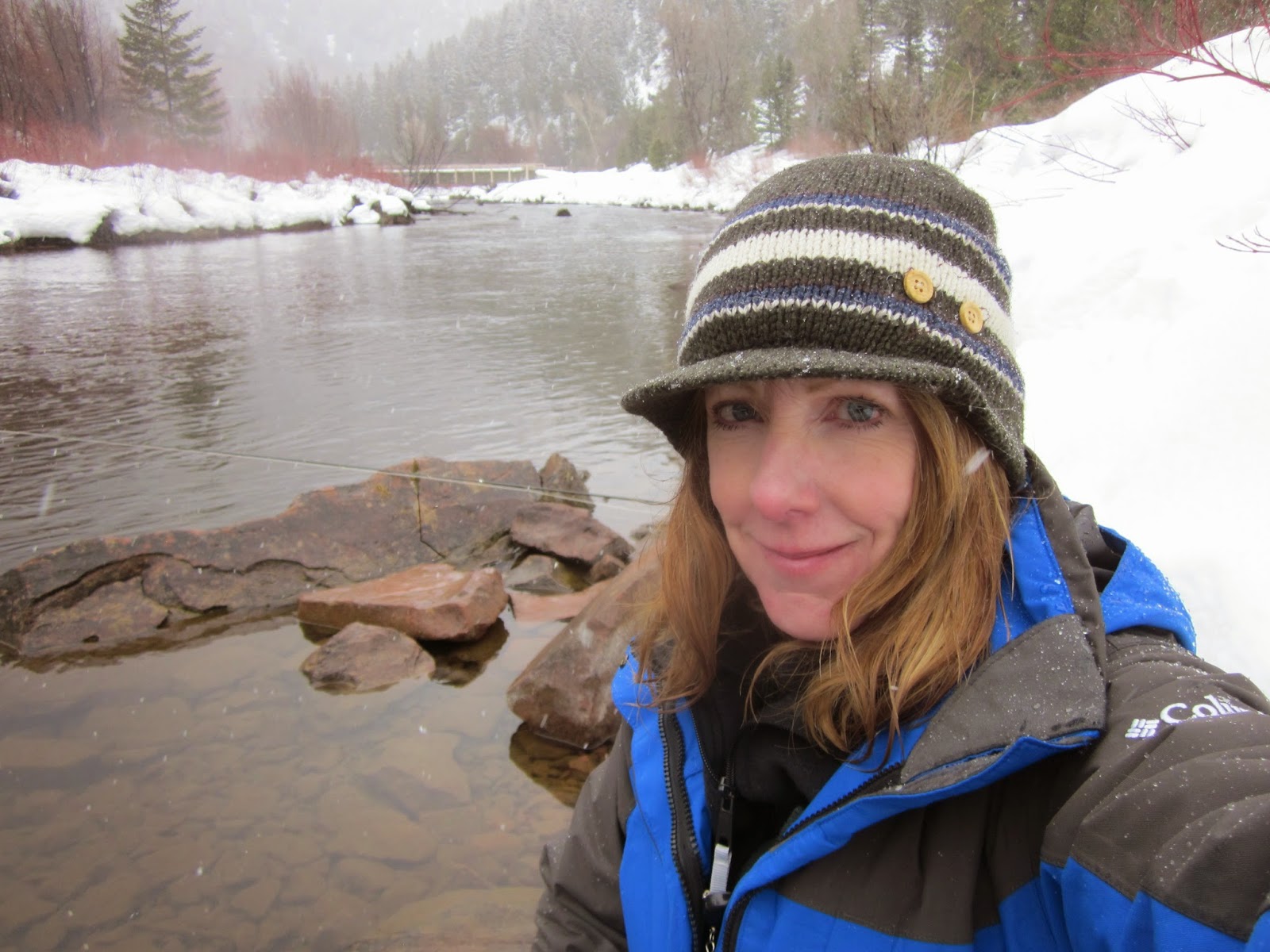 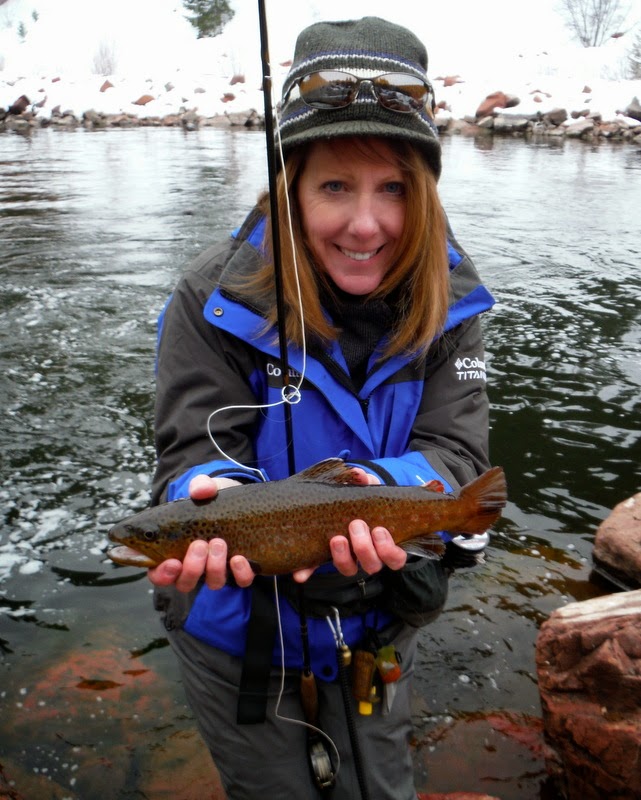 Hey, Lisa, look's like it is time to put that glove with the handwarmer back on for a few... = ) 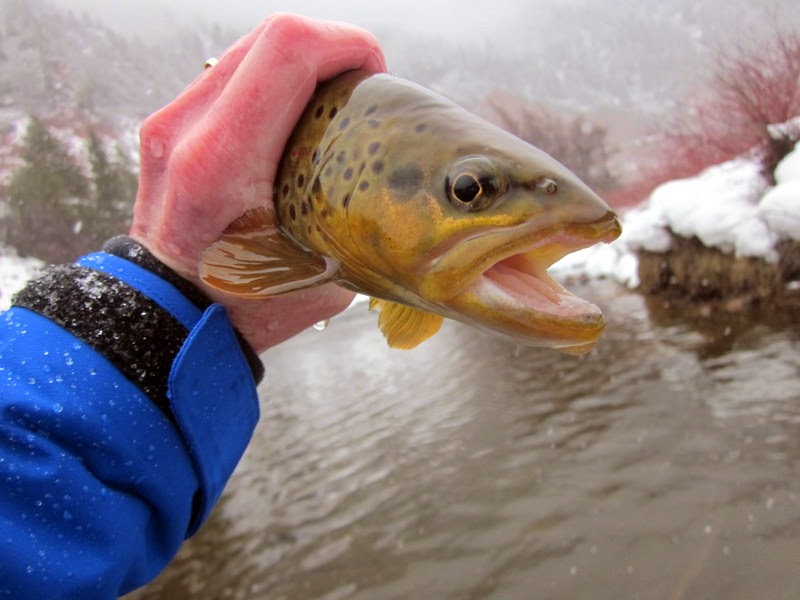 A few more brownies for me too... 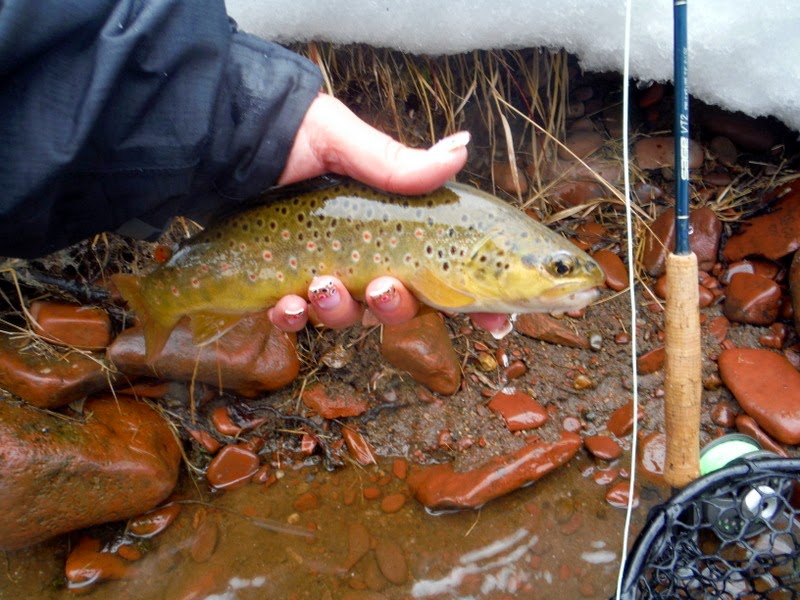 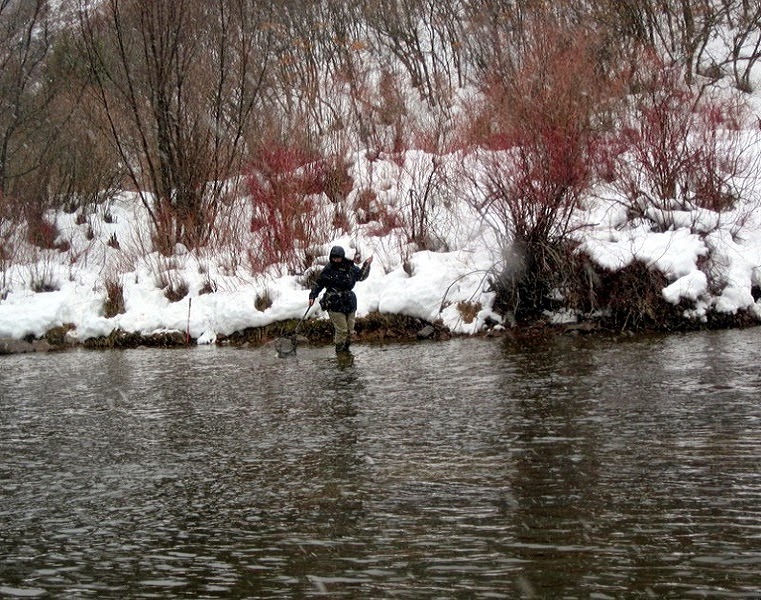 So, Day 2 ended and we headed out to figure out our strategies for the finale. 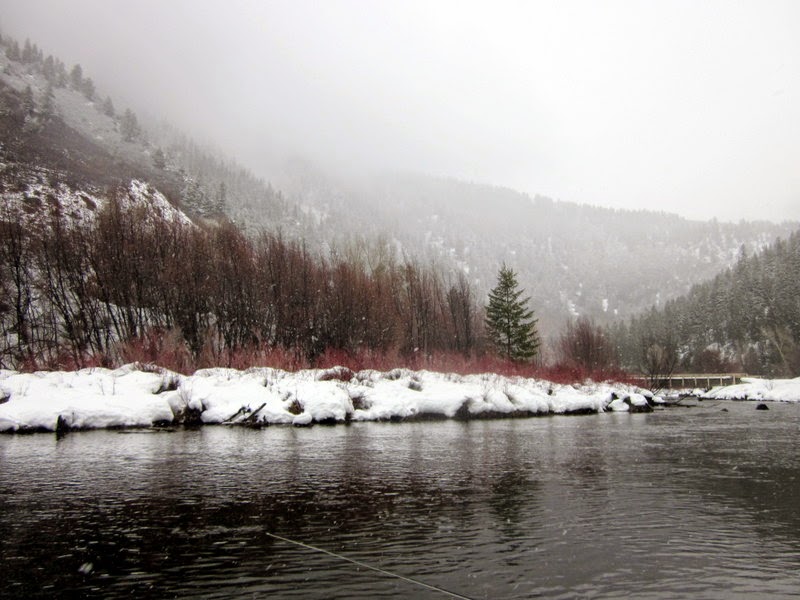 Now, we had been following the tips of friends that had been on this river recently and also the advice from the fly shop experts.  With the final day coming near, we were in need of some "tweeking" to get past the cold temps that the fish obviously were a bit effected by.   I had been using 5x mono tippet and size 20's on the flies.  Now it was time to get down and dirty.  6x fluoro tippet and size 22's... No, I will not go size 24 EVER!!!!!! 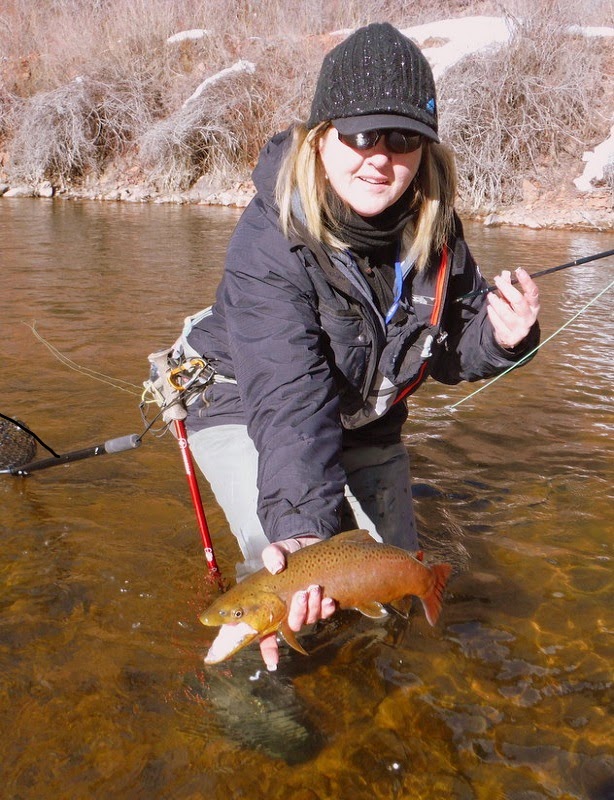 Yes, these new "tweeks" brought in a few nice fish.  But, I have to give credit where credit is due... I met up with two of the nicest guys on my last afternoon.  The first one, was a local... older gentleman, who was watching me try to get out of my tangles as he caught fish after fish after fish!  Haha.  When I got all sorted out, he offered me his spot.  Told me to fish these two flies out of his fly box.  What a super guy he was... So, thank you to whoever you are!  That is what I call sportsmanship.  Sharing the river and sharing the knowledge.  He said that he could fish every day there and sometimes did!  Lol.  So, I thanked him and got down to business and landed one.  He left and another local watched me as I was working the "magic run"...  Well, he noticed that I was working off a longer leader than he usually used.  So, he showed me his set up and it was like two feet shorter than mine.  What the heck!  Do what the locals do, right?!!!  Besides the 6x fluoro and the size 22's... I needed a seven foot leader.  And less distance between my indicator and the fly.  BAM!!!  Thank you, Mark! 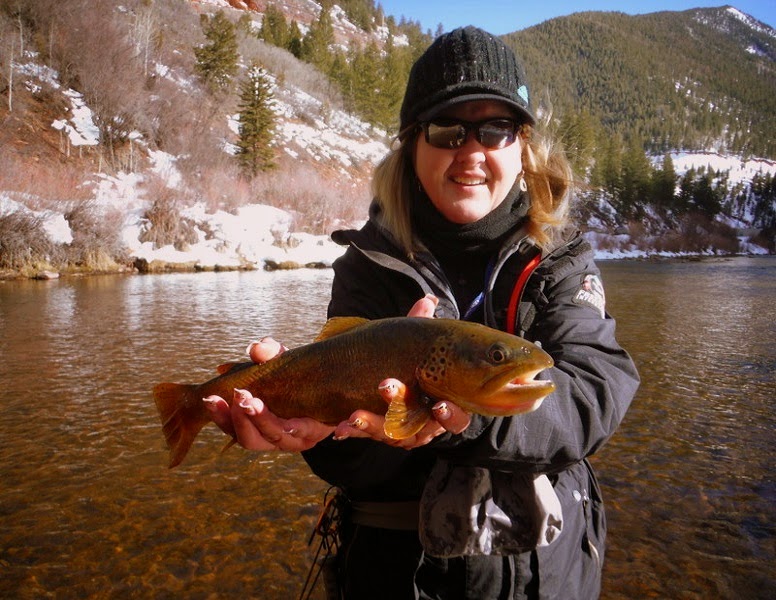 I'm willing to listen...  And the moral to this story is, if you ever have the chance to help someone with a few "tweeks" on the river... take the opportunity to share your knowledge if they ask for it.  Especially if they are an out of town'r that believes the forecast will be 48 degrees and sunny instead of the actual 30 and snowy.  = )

A special thanks to my dear friend, Lisa, who is one of the most gifted fly fishing ladies and a fun roadie to boot...  We had a ton of fun catching fish and finding good places to eat.  Hahahahaha 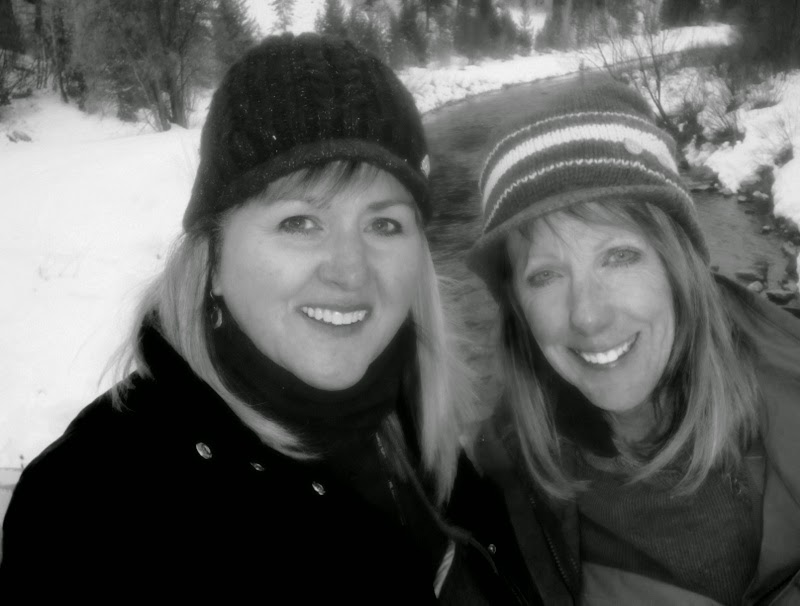