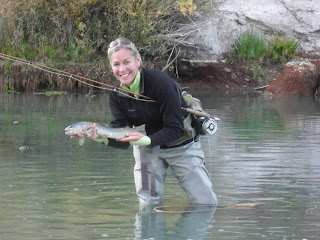 It's Friday and my plane touches down in Boise, Idaho.  My long awaited journey is about to begin.  Every year, I plan at least one trip with Rebecca Garlock to fly fish hours upon hours.  We start early and end late, and enjoy every minute of it!  So, I was excited to be meeting up with her once again and to becoming even better friends and share our god-given urge to be on the river to experience what some people never see...trophy size, brown and rainbow trout!  The Outdooress and Co-Chief of the Outdoor Blogger Network has an intriguing style to her cast and overall techniques on the water.  It is an amazing sight to behold....honestly. 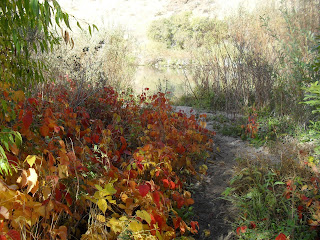 We met up with Chris Hunt (EatMoreBrookTrout) and full time TU guru and freelance writer from Idaho.  He came over on some business and had time to fish with us on Saturday.  Another friend of Rebecca's, Michael, a local fly fishing expert of the River X, met us there and showed us some new areas that we hadn't fished before.  And they were money!  So, a fun group putting their lines in and making new friendships.  My first walk in had me tingling from head to foot...I was here!!  Excitement was in the air as I stepped into the magical waters... 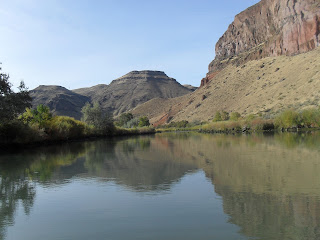 We did have a lower level of water than we would have liked, but it still worked out fine.  They had just lowered it a few days before...so, the fish weren't quite acclimated yet to their new digs, but we still caught enough fish.   The river was still...but, not for long!  Soon, we had ring after ring...with fish slurping all around us.  I am not a dry fly girl and so I was playing follow the leader and watching their techniques.  There were some nice size fish that day, ranging from probably 14 to 24 inches.  Chris was impressed with this fishery for sure. 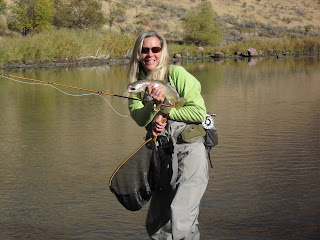 Lunch was entertaining...you know there are always varmints of some sort in my adventures!  As I was sitting on the side of the river enjoying my sandwich...Rebecca quickly yells, "Get up, Emily!  There is a snake behind your chair coming your way!"  Eeek!!  I didn't need to hear that twice!  Really...Some kind of boa or something...I didn't sit back down.  Ha.  As we got back in the vehicles and went up the road after lunch, we gazed down off the side of the cliff and there they were!  The biggest, fattest, browns and rainbows one could hope for.  They were swimming in a large, boulder area of the river and it was just an amazing sight.  We didn't fish there, as there were other fishermen in that spot already...but, we enjoyed being part of the "peanut gallery" as Rebecca calls it! 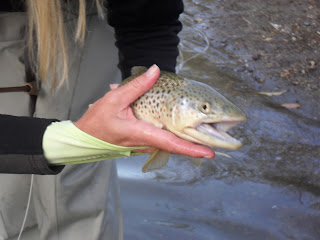 This is Fly Fishing Heaven...no doubt about it.  We headed towards another special place with a faster run for me.  Another hour or so, we headed back to the original spot.  After another hour, I was already exhausted and called it a day.  So, when Rebecca was yelling my name to come over to the action at dusk, I was already sleeping in the car... Bummer actually, she got like ten more fish at dusk and the guys had their mouths open,  drooling just a bit at her success...heehee.  End of Day 1... 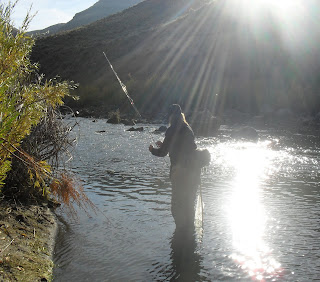 Sunday was "Girl's Day" !  And I was ready...I had hoped for better results on Saturday, but just didn't have my rhythm or something...Well, it was that something that had Rebecca thinking about all night.  She told me right off the bat that morning, that we were out to catch a lot of fish.  Right on!  Whatever you say RG...I'm listening!  She had a plan.  And now we get to the title of this post..."Unorthodox Fly Fishing, Outdooress Style!"  I was going to follow the "Unorthodox Outdooress" (shall we call her UO??)  How about it Kirk Werner, (UA)?  Well, I didn't really care what she threw at me, as long as it worked!  So, here is the top ten tips for RD...now remember, these might not be for everyone...they just were right for me, as my head has been full of instruction from fly shop lessons for the past three years!  Rebecca thought that it was time to take all of the techniques that were intermingled in my head and toss them aside for awhile. So, drumroll, please... 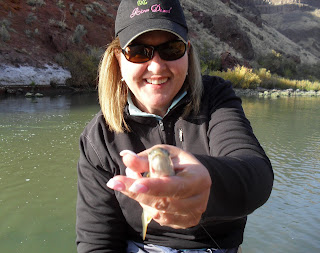 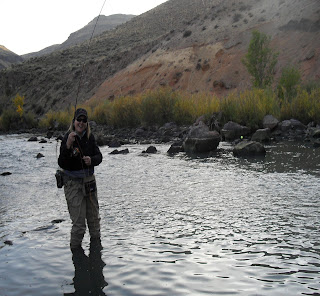 And Bonus Tip...Always put your line in the water as you walk upstream!  Don't reel up.  Fish!
My favorite RG (UO) quote on the trip..."The fish are taunting me!  I must go pursue them!"  And she did.
The hours went by way too fast.  I was finally having fun, without a care in the world and catching one after another...that chica is something else.  What a fishing buddy to have along.  She never gave up on me...and finally we were hearing "Incoming"!!  over and over again...Yes, I stayed out until dusk. 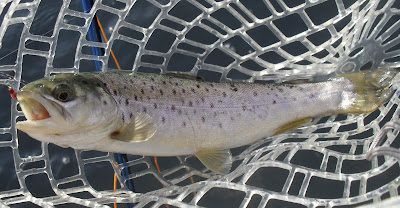 The most amazing part of the trip wasn't catching all the teenage browns downstream from their parents.  It was watching the huge 20+ browns spawning just a few feet away from us as we stood on the bank.  These fish are not spooky in the least.  It is also incredible to see a trophy size brown basically swim in front of your feet as you are settling in to cast.  That is why I come back each year.  It was unfortunate that the biggest fish were "occupied", but my Red Chronomid Midge was finding a lot of other suitors! 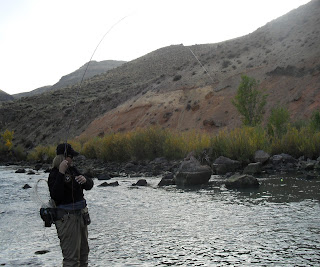 And by the end of the day, I was completely in my element.  Relaxed and in the rhythm that Rebecca had hoped for me.  I have been told that next year is Round 2 with the "Unorthodox Outdooress" training, as she will show me how to go after those browns in the slow, still waters and "Pursue them!"  Another adventure in the books.  It was all good.
Thanks to all of those that were part of it! And hats off to Rebecca for another great journey...
Footnote:  I found it interesting that one of my one shots of Rebecca resembled another picture that I have seen on the blogwaves...you tell me??!! 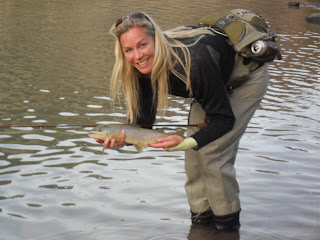 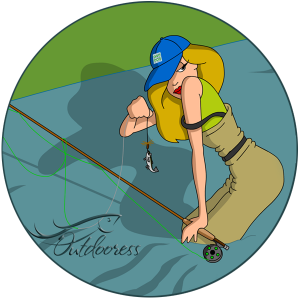