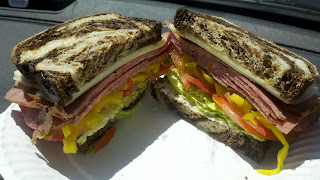 Day 1 - This soon to be 1400 mile journey started a little frenzied, I must admit.  We were going to leave on Saturday, then at the last minute, found out that Maynard wanted to leave on Friday.  I had it off from work, as it was going to be my prep day.  Well, now I just had to throw all my gear together in a pile and hope it was all complete.  My flies stayed in their prescription bottles instead of being neatly arranged in the new fly box that I had ready to go.  No time to buy any new clothes for the trip.  My two pairs of shirts and pants would have to do.  Montana was waiting!  And I was not going to delay the departure... We met up with a friend of mine, Peggy Sue.  She had taken a fly fishing class with me and we wanted to experience the Firehole River.  It is both of our favorites in Yellowstone.  So, we were off!  Along the way, it was sandwich time at the Mountain Market in Island Park, ID.  And greatest homemade mustard!  (I brought some home)  Thanks, Dione! 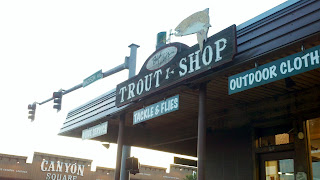 We drove into West Yellowstone in the early afternoon, got our licenses and stopped by to tell our friend, Ernie (Flyshop Guru) that we had arrived.  And to pick up some of the "hot" flies for the Firehole. Haha.  We also got directions on where the better fishing might be.  Hmmm...  Anyway, we were off once again, bidding Ernie goodbye.  He hated to be left out...but, no playing until your work is done!!  = )  We drove around looking for the "place".  Well, we picked one, but not quite sure if that was it or not!  (Not) 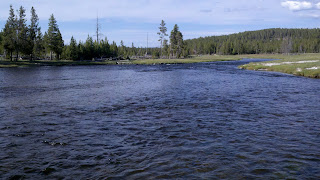 This was a forest of pines that we would have to walk through to the river.  Yeah, RD in a forest with BEARS!  My first time loading up with a can of bear spray.... Why wasn't I feeling much better?  Maynard assured me that the probability was small that we would run into one.  Peggy Sue just laughed...Why was she laughing?  We finally found the river after about a 2 1/2 mi. trek in... We gave it our best shot for a couple of hours, but it was fishing rather slow. 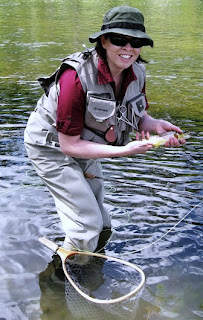 I landed a 14" rainbow, Peggy Sue caught a brown trout, and Maynard well...had an adventure. You see, we found a meadow coming back that we could walk in, which would give us a better sighting of bears running at us!  Much better than a bear jumping at you from behind a tree!  Haha.  We were almost through this meadow when we discovered marshes in front of us.  There was no way to go around them.  As I sloshed through the thick, crusty volcanic mud... it stuck to my waders like paste.  I was about ready to have a melt down, being so hot in the waders with the long walk.  So, I just kept moving ahead!  Visions (or were those hallucinations?) of the truck lay before me in my head!  Only a little ways to go!  Maynard had chosen to wear his sandals and shorts and wet wade because of the temps.  Well, Maynard didn't fare well.  Down he went, into the mud.  After reaching down at his feet...he managed to take off the sandals and step out.  He had completely white, pasty legs from the crusty mud!  Kind of like the Pillsbury Dough Boy's legs... It was incredible.  What a mess... 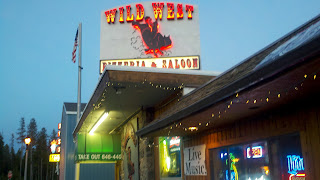 We were back on the road again...back to West Yellowstone.  We would meet Ernie and have a pizza at my favorite place in town...Wild West.  There was some kind of country/blue grass band playing and the place was lively.  A good time. Oh, did I mention that if you go with fly shop guys...you might get a white pizza with artichoke and tomatoes?  Hmmm... Maynard wasn't thrilled.  To forget that he didn't get meat on his pizza...he started dancing some kind of watusi dance!!! 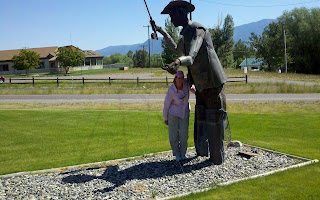 Day 2 - We headed out towards the Madison River.  Lions Bridge seemed to be somewhere that we could have a rest stop and I could throw a few casts in for just twenty minutes.  Back in the truck and on to Ennis, Mt.  (Pronounced Eh-nis)  Ok...I confess, I went with the long E and was quickly corrected, by Maynard.   I loved being greeted by none other than an iron fly fisherman in the middle of town! (He's got a trout at the other end of the gravel box)  My guess is that Lewis & Clark probably came through here on there expedition.  A very quaint town. 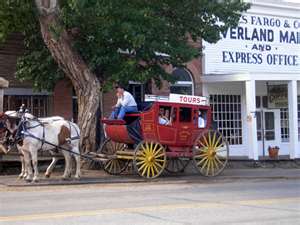 We drive a little further and we get to Virginia City, Mt.  It has stagecoach tours waiting for visitors along side the old, western style main street.  A boom town during the gold rush, they have kept all the shops in tact for tourism.  Half of the structures were built before 1900.  Didn't have time to stop, but someday it would be fun to go in and look around a bit.  It's a fun, little ghost town and even Calamity Jane lived here for awhile! 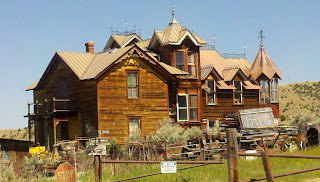 Next stop...(Are you seeing a trend here?  This isn't just any ordinary fly fishing trip!  No, Maynard only give scenic tours that have fly fishing in them!  For which I was very grateful because I had never been through this part of Mt.)  We arrive in Nevada City.  Home of the "Haunted Mansion"...at least that is what we are calling it!  An old western town that has small shops and old frame houses.  Then, we get to this house!  Scary at night, I bet... 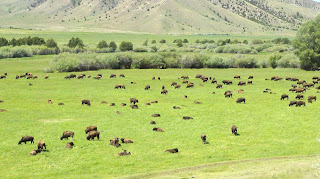 Now, we find the land of fly fishing (And a few buffalo!)  As we entered into the Alder Gulch and Ruby River Valley...it was breathtaking.  A beautiful valley of hills and trees.  Maynard had a great idea of putting us on Fluvial Arctic Grayling (Thymallus Arcticus)  in the Ruby River... I have always wanted to see a grayling, up close and personal.  This was one of the "extra perks" on having Maynard drive...he knew the spots that had all different species of trout. 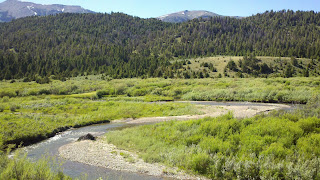 And I was totally "game on" finding a grayling!  But, not just any ordinary grayling.  A river-run Fluvial Arctic Grayling!  There are only a couple of rivers in the U.S. that have them, as they primarily occupy lakes.  But, what were my chances, really?  I mean, I have to work for every trout that I catch...it would be pure luck if I got into one.   But, just between you and me, I could see how Maynard's face lit up when he said that he was going up there specifically for us to find one.  So, I couldn't disappoint! = )
Unless, I met up with this guy first!  Rawwwrrrr!!!  Yep, Yogi. (nice nails...errr...claws)
I really didn't need to see this next to the hole that I wanted to fish out of... 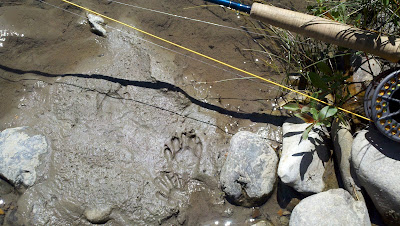 I was into my casting about 3-4 times...and "fish on"!  Something deep below started to rise from the water...it was greyish looking...so I knew it wasn't a brown trout!  I didn't look like a rainbow either...Could it be???  I screamed over to Maynard and said..."Is this it?"  He replied, "Looks like an Arctic Grayling!" 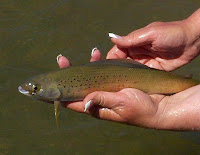 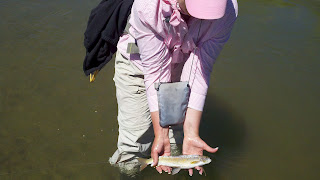 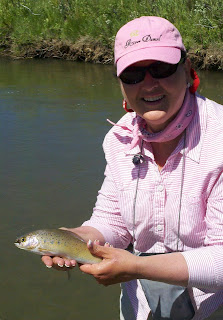 To say that I was a little ecstactic, would be an understatement... To catch a new species of fish is exciting...but, to land something that you can't find just anywhere...that is special.  Thanks, Maynard...for thinking up this journey!  Peggy Sue and Maynard were happy netting cutties on this stretch of water... 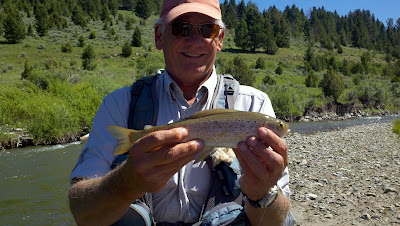 Maynard... Showing me how to hold a Fluvial Arctic Grayling...top dorsal fin up!
So, our second day was done.  It was time to drive the last leg of the day into Dillon, MT... For the Beaverhead River was before us... = )  We checked into our rooms (which happened to be the last couple of rooms due to a rodeo in town...so they said.  I think they just looked at us and said..."far back corner, away from everyone!"  Ha! )  We cleaned up a bit and finished the day with some grub at Dillon's finest...
THE TACO BUS!! 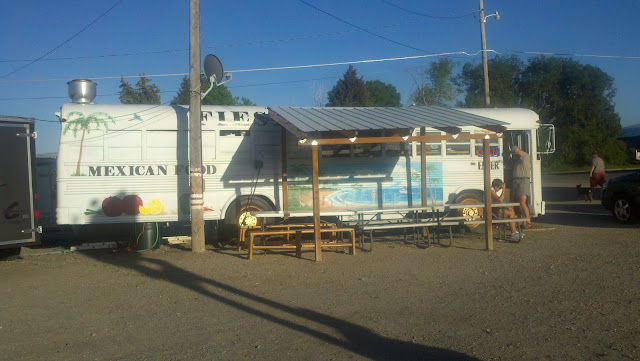 Why would I make this the biggest picture on this post?  Simple...I was fetchin' hungry!  A macho carnitas burrito did the trick.  If ever in Dillon, Mt... Highly recommended.  And conveniently placed across the parking lot from the hotel.  = )
NEXT UP:  Ernie finds his way out of the flyshop, finally... Late at night, he journeys across mountains and streams, and fortunately avoiding deer contact...arrives to fish with us the next day.  Now, our adventure will have a few extra kicks in it!   Peggy Sue and I better be ready to keep up the pace!  You can bet that we will give it our all... BIG FISH are on the horizon!
Montana... Got to love it.
﻿
﻿
Posted by THE RIVER DAMSEL at 10:21 PM