Now, there are continental breakfasts and there are Continental Breakfasts... We woke up to the first... uncapitalized.  = (   Not too much room to complain because you get what you pay for.  The motel was cheap and so the breakfast matched the bill.  But, if I had been anywhere else...I would have had more than an English muffin and orange juice to carry me through the day.  Glad that I had that Snickers bar in my backpack!  What does "Continental Breakfast" really mean?  It means that you are hungry by 10:30 am... HA!  This trip was definitely going "continental" as the odometer on the truck would indicate.  We definitely covered a lot of ground in the five days.  If one fishing hole wasn't working...we were off in search of a better place!
So, from the Ruby with Maynard and Peggy Sue... 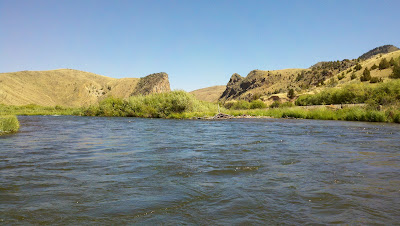 We now loaded up the truck and headed out to the Beaverhead along with Ernie.  This soon became one of my new favorite rivers.  When we got to the first destinated place to throw a line in,  large fish greeted us in the shallows as we got in.  It was kind of strange... because it wasn't spawning season.  They did seem paired up.  But, the fly shop told me later on that the fish were just feeding.  Huh.  Well, these shallow dwellers weren't interested in what we had to offer. 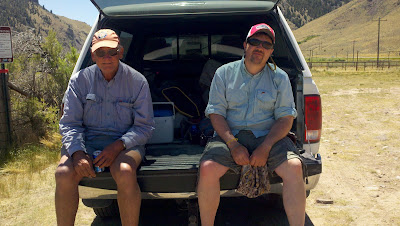 So, we kept walking.  We gave this first spot about two hours.  Moved on to the next river access point that we thought would be the ticket.  The WIND now was going to become a factor as we got closer to late morning.  Peggy Sue and I decided to wait in the car for a verdict.  The guys came back with a "no-go" on this location.  Over the river and through the woods we went once again.  The next fishing access would have deep holes with big trout.   I lost a BIG fish in this area of the river.  A late set would prevent him from staying on the hook.  Darn it!  Peggy Sue, Maynard and Ernie were batting 0 also.   Ernie was quickly turning into "Grumpy" from the Seven Dwarfs!!  He was not happy when he wasn't catching!  So, after another couple hours, we got back in the truck and moved again, with the WIND coming along with us!  Whooosh!  We were probably fishing in 30-40 mph easy and getting stronger as the day moved on. 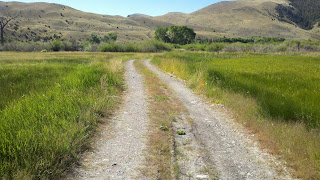 Slow fishing on the Beaverhead rarely happens...at least that is what I have heard.  It was just turning out to be a funky day.  Our last stop along this river would be a long walk in... Yeah, I was way excited to see the trail to the cliffs...way over yonder!  But, I figured this was the last chance of the day to find some trout.  So, I got out my ice pack and water bottle (Oh, did I say that it was near 90 degrees too?)  It would have to do for the next couple of hours.  WIND increasing!  Who ordered this wind? 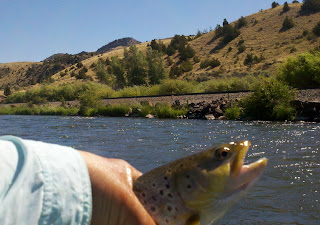 At the river, it was "focus" time...I was going to catch a fish, dang it!   Finally, a pull on the line... A nice brown trout in the net.  Hoorah!  It was a day of firsts... Included in this little trip were some valuable lessons for the guys.  Maynard taught me how to cast in the wind "properly" (keep low) ... as my cast wasn't going anywhere!  I was also taught to cinch up my knot even tighter when putting on the fly.  And to clip that line closer and not leave too long of a tag to distract the fish.  It's never too late to "clean up" a little on your bad habits. Thanks, Maynard!
A couple of fish between 17-19 inches this day...I wasn't complaining.
No guts, No glory...
I was in for the battle...no matter how long it took.  Even in the WIND! 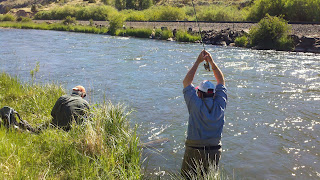 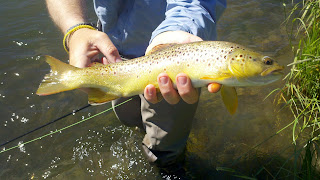 And Ernie wasn't going to be beaten by BIG fish!!  He finally connected for a few nice trout and I think that there was even a slow grin appearing on his face.  WIND increasing!  Maynard got into some fish too.  Even though we connected for a few in this hole, we were looking for better catching.   Maynard and I suggested the Big Hole River, not too far away.  We were back on the road again and stopped in Dillon at Frontier Anglers for their thoughts on the subject.  They said "Go Bowling"!  Haha.  We decided to have a late lunch and figure things out.  The Big Hole it was... Ernie wasn't too thrilled with the whole thing, but went along with it anyway.   Back in the truck and a drive up to Divide, MT.  This is when you know where you are going, but you don't.  Ha.  Ernie just wanted to fish...not drive around looking for the river all day long!  Soon, Maynard and Ernie were fussing like an old married couple and Peggy Sue and I were chuckling at them as we drove along!  We finally got there after driving a long dirt road.  Whew! 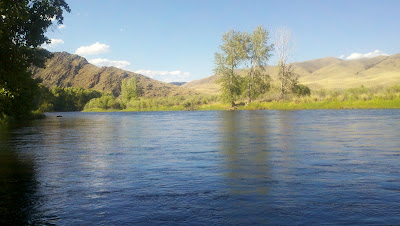 The BIG HOLE RIVER... Wide, deep, and slippery!  That was my assessment.  Maynard wanted to stay behind in the truck and rest.  So, Peggy Sue, Ernie and I ventured out.  We were told that we have a certain time limit.  And when we heard the horn...that meant "over"!  Well, we headed out in a gale status windstorm to see if we could get our flies on water.  A half hour passed and the horn went off. 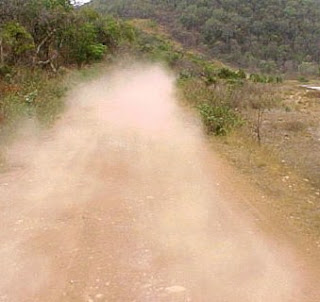 I guess that we were a few minutes late, as when we got up to the parking area, Maynard took off as soon as we approached the truck!  We were left in the dust... And Maynard was probably laughing his head off as he drove down the dusty road.  We looked at each other in amazement...not thinking that he would really leave and not come back for us... = )  But, truth be told, I did start coming back when I heard the honk.  There was this little thing called having difficulty getting out of the water because of the depth at the side bank.  The best way out was to climb a tree trunk out and it wasn't all that graceful. Ahhhh... (Funniest video material, seriously)  When I finally plopped back onto the bank, my hair was stuck in branches and my rod...well, yeah...tangled up.

And Ernie was disgruntled to stop now that he was dialed in on fish... He had caught a couple more by an island and had spotted some even bigger ones out there.  Peggy Sue had caught herself a brownie (and a nice one it was!  To the right...) and she was ready to find another...but, no time.  The truck came back 10 min later...  And we all got in without further discussion.  Lesson learned.  We headed back to Dillon for some prime rib...but, that got squashed.  The guys wanted a couple hours to nap and when we all headed back over...restaurant closed!  It seems that Dillon closes up at 10pm on a Sunday night.  It was time for a hamburger stop and call it a day for Day 3. 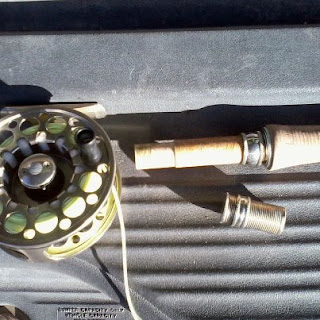 We really should have known that it was going to be one of "those days"...  It started out in the parking lot at the hotel when Ernie found one of his fly rods looking like this...

Good thing he works at a fly shop, eh??? 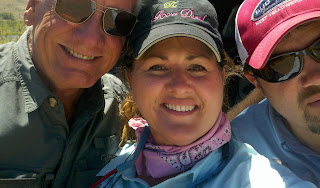 What would Day 4 bring?  Happy smiles???  Always.  Would we find more fish and more netted in one day than the whole trip so far?  Haha.  I hope so!  So far, the tallies were not enormous!  Enough to put a smile on my face... But, we were ready to hit it big on Day 4.  Where to find more fish...was the question.  And on Day 4... RD forgets a few things... Oh boy, looks like I am now labeled as "high maintenance"...  Honestly, it was they were honest mistakes of being tired the next morning.  Those things happen, don't they?  = )
UP NEXT:  More BIG fish on the horizon... The Beaverhead again and my beloved Madison!
The Finale...and what a great one it is! 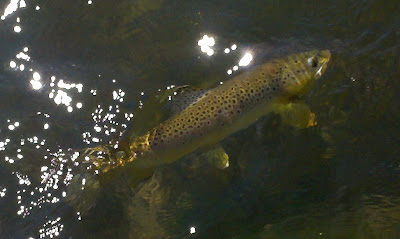 Ernie's winner from Day 3
Posted by THE RIVER DAMSEL at 9:43 PM