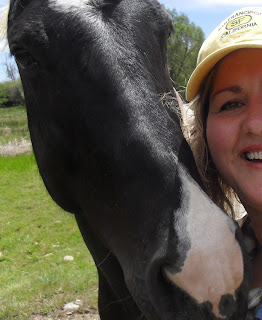 Fish Tuesday this week, has to go down as one of my more epic days on the water.  Hands down.  You see, I had to drop off a dog to be groomed, went to my hair appt., picked up doughnuts for a hungry teenager, and flew to Western Rivers to rent boots for my son, who finally was willing to join his mom on the river!  But, of course that all changed when I got to the shop.  I received a text that he had changed his mind and was going out with friends.  Ok...I understand the need to hang out with your peers rather than your mother...But, if he had only known what he was about to see this day on the river...Well, let's just say that he totally made the wrong decision!  First, a beautiful day around 75 degrees and sunny skies.  Then...the pasture walk.  I had my choice of pastures to walk through...I could say hello to the goats, or the llamas, or the cattle, or the horses...I picked the horses!  I love this magnificent animal.  So majestic...And friendly!!  Ha. 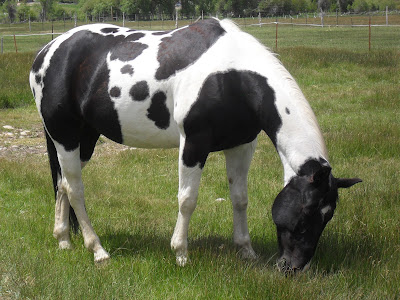 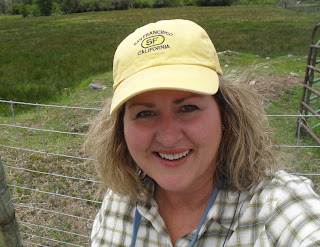 I couldn't visit too long, as it was already 2:30 pm and I was probably missing a hatch that started an hour before I got there!    But, it hadn't started yet or maybe it just wasn't going to happen on this day.  I put on my lucky yellow hat (Kirk Werner...So sorry, I forgot to pack the banana to test out that yellow banana/fishing theory of yours.)  I had this new green drake nymph that I was dying to try even though there wasn't any buzzing around.  But, I knew there were golden stones.
So, I put the two together on a nymph rig and this is what I got!  I should have known better than to fish deep!  Hello, Mr. Rocky Mountain Whitefish.  And on the green drake.  Lol. 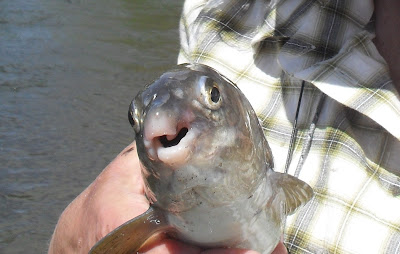 It was time for revenge...To find real trout.  As I searched my fanny pack, a caddis landed on my hand.  Nice!  A ring here, a ring there.  This slowpoke needed to hurry it up!  I was hunting all through my pack to find a Higa's S.O.S. nymph...Great, I had forgotten that too!  I had a new dozen and left them in my other shirt pocket. But, wait!  I found one in the bottom corner of the pack that must have fallen out of my fly box. That would last me maybe a half hour...ha!  So, putting the dry dropper of caddis and S.O.S., I was ready.  The  S.O.S.   This is one amazing nymph fly!!  There isn't really anything quite like it.  In a hatch or without a hatch...it can do the job.  Mr. Reliable.  Thank you, Spencer Higa, for creating a masterpiece of a pattern.
More rings.  Fish were jumping.  And I was in the middle of it all.  No other fishermen to share the water with either!  I was in a fishing paradise...  I laid the caddis down ever so softly.  The S.O.S falling beneath.  Wham!  Incoming!  And again and again! 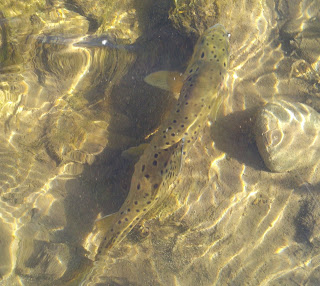 A wave of caddis flying overhead and what were they hitting?  The nymph dropper, of course!  I am not a dry fly fisherman and I really thought that I would have a chance on this day.  But, guess what?  Every single trout took the S.O.S.  Why?  You tell me... I have no clue why one out of twenty four couldn't do me the courtesy of letting me watch a dry fly hit.  It had to be one of the weirdest days on the river in my three plus years.  I caught every fish on the same fly (No, I didn't lose it in trees or rocks) during a three and a half hour span.  Let's go back here...first of all, I am not a high numbers gal on the water.  So, that was highly unusual.  Then, to catch all of those trout on the same fly...very strange.  But, enjoyable!! = )

Besides the lucky yellow hat, I brought these.  Maybe I will continue to bring them! 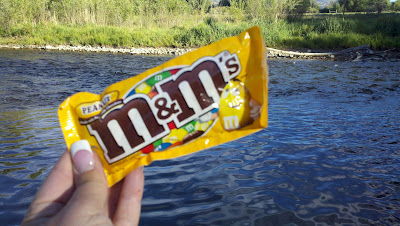 As I left, the horses were gone, but these guys were next to my car. 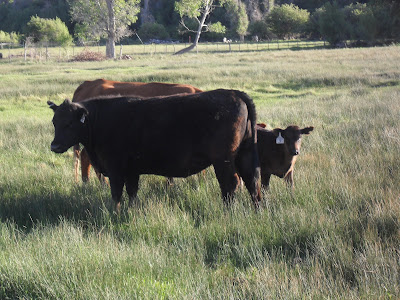 An enjoyable day, although still mystified why I can't catch one on the dry fly...
Even when I am standing in the middle of two waves of caddis.  = )  Go figure.
For Howard and anyone else that would like to give the S.O.S. a try...

Posted by THE RIVER DAMSEL at 8:58 PM