Sometimes, you settle for "A Little Stinker"...as the case played out this week on "Fish Tuesday"... I thought that this was the day...the calm before the storm.  Well, kind of.  It was a day between storms.  And when I started going up the beaten path (which I have frequent walker miles), the path got a little more slippery and a little muddier.  But, I was convinced that this path WOULD  lead me to a few fish, despite the high water and inconsistent water temps as of late.  I walked about a mile before I saw the spot that I wanted to put a line in.  There it was before me...the most beautiful, deep pool, which should have been full of fish.  But, not a peep.  No bug activity and no rising fish like you usually see in this particular pool.  So, I decided to take my journey a little farther down the path.  The coolness of the brisk air felt great.  The birds were chirping and as I followed their path, I watched and listened.  A few casts later, I had a fish bite, but it came off the fly.  Maybe a little bit jerky on the set.  No worries...we tried again and again...where was that fish?  That "Little Stinker" wasn't going to get away from me!  I didn't know if there would be much more opportunity out there...A few more casts and a few more steps down the bank...Fish On!  Oh, it was not much of a pull...so I new it wasn't going to be any trophy...but, it was a fish!  Out of all the 14" to 24" fish in the Provo River...this is what I came up with...Alas!  "The Little Stinker"!! 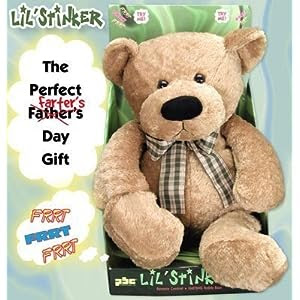 The Lil' Stinker Farting Bear is a 12in. remote controlled farting bear & it's definitely a gas! Sit him on the couch and surprise guests from across the room by pushing the remote control. Cheeks light up in embarrassment after the GAStly deed!
NO...THAT'S NOT WHAT I CAME UP WITH...WRONG KIND OF STINKER!

In fact, your baby will smell so fresh and clean, you’ll probably want to eat them . . . but you know . . . don’t do that! Let Little Stinker be the perfect answer for your poopy prancer.

NO!  THAT ISN'T "THE LITTLE STINKER" THAT I'M TALKING ABOUT EITHER!!!  DEFINITELY NOT!

After two long hours, I had caught the fish of my dreams...I named him "Sparky" as he was about the only "spark" of fish activity that I saw all morning...
Posted by THE RIVER DAMSEL at 8:25 AM