I really don't know how to better describe the events of yesterday's fishing trip, except to show a few pictures.  I believe that they will tell it all.  In the end,  I decided that I need new fishing gear... Knee guards...or just better judgement.
﻿﻿
﻿﻿There is this term called "Combat Fishing"...it usually relates to the density of fisherman on the river.  But, in my case, it means...one River Damsel in a stretch of stronger current with one 20 + inch brown trout. (You will have to forgive the missing picture of the actual battle...needless to say, there wasn't time to take a few pics!
﻿﻿

A freshly fallen 8 inches of snow welcomed me as I started my journey... 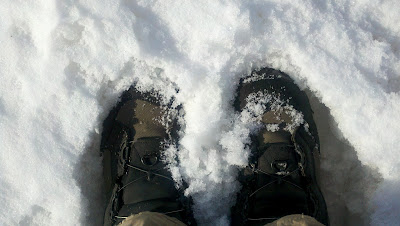 I was excited to try out my new 10' 4wt fly rod...
but, because I left my Lamson reel at home, the low cost back-up had to be used. 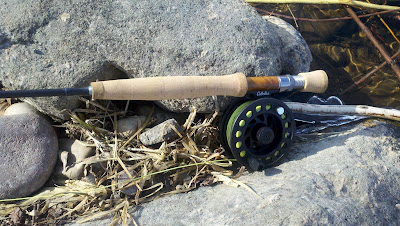 The first catch of the day was this "teenager" of a Brown Trout.
The new rod had been "initiated"... 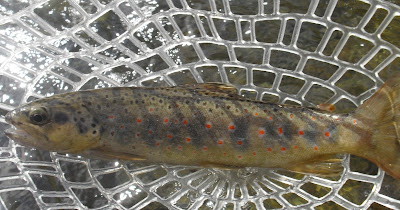 Then, I had it in my mind that there would be bigger fish down by the bridge.
And I was right.
Then, this is where the story goes...downstream!!  In more ways than one.
I really want to blame this mishap on the lousy back up reel, but it could also be the angler involved.  : ) This reel was supposed to come with some sort of drag system!   I couldn't tighten it up...And all of a sudden, it was reeling out of control with a 20 plus brown on...He showed me his head and yellow tail once as he pulled away yard by yard.  Oh, I wanted this guy!!  But, he was determined to go back down deep.  My rod had a beautiful bend in it...if we are looking for something postive about this experience!  Sooner than expected though, I was to the backing of my line.  Now, it was nervous time.  He was too far away from me going downstream and the shear force made me stumble over some jagged rocks underneath.  My knees screamed in pain.  Still holding on to my fly rod with every bit of strength I had left,  I tried to reach back for my clippers.  I was not going to lose a new rod by golly!!  But, before I could find them and cut the line...
Mr. Brown...broke off.  Insult to injury! : (  Well, at least I saved my line, I guess!
﻿ ﻿﻿﻿﻿﻿﻿ ﻿ ﻿﻿﻿
And my suspicions of what might happen if I fell hard enough one day were answered.  Patagonia makes a good wader.  But, I totally believe in reinforced knees, which my first Cabelas waders had...I wouldn't have had the holes, I don't believe.  Now, hopefully the patch kit fixes them...

And finally home to give it a rest...a few scrapes to the hands and a few bruises to the knees and ego.  Whether I could have brought that fish in with a different reel is beside the point.  The "reel" factor was that I wasn't in an area that I should have been in.  Yes, it was a spot that had a lot of boulders and pockets water.  Good holding spots for trout.  My sense of balance is not as good as others.   And the current was stronger than I should have ventured out in.  So, my tippet today would be to fish in those waters that are in your comfort zone.  Don't risk your safety for a silly ol' fish!  (even 20 + browns)  Hindsight.   ﻿﻿I think it's time for the hot tub. ﻿
﻿﻿
﻿﻿
Posted by THE RIVER DAMSEL at 2:51 PM