Bear...Errr, Bison Watch At The Lamar

Last year, I had a Picasa failure with my pictures that were connected to about three months of posts...vanished, gone!  So, I am re-creating a few of my favorite posts and applying photos once again!  For those who already commented on the story, thank you!  And for those newcomers that might not have read this story about one of my times on the Lamar River in Yellowstone...one of the most perfect habitats for fly-fishermen...enjoy! 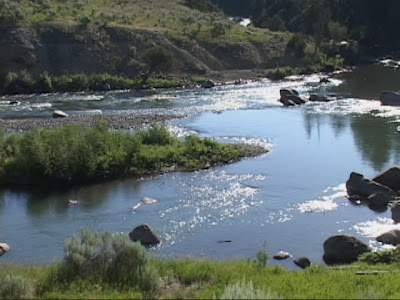 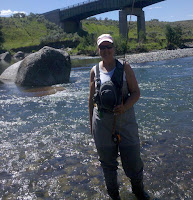 Another segment in my Yellowstone series...We move on to the Lamar River!!...In the summer of 2010, I had the opportunity to travel once again to Yellowstone National Park.  It is one of my favorite places to visit and I usually try to make it an annual/semi annual trip.  I went with a couple of friends and out of the 8 rivers that we hit in the 3 day period (yes, that was crazy), the Lamar River has to be one of the favorites.  For sure, next time I go to the Lamar, it will be a full day wading this beautiful river.  The most amazing thing was the emerald green of the water.  And the rocks...absolutely beautiful.  The Lamar River is a tributary of the Yellowstone River.  It is approximately 40 mi. long and is located in the NE part of Yellowstone. 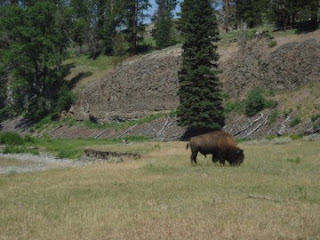 It is known for bears, bison and wolves in the area.  When we entered the park, they had told us about the "Bear Watch" that was active in the Lamar Valley which was our destination...I always figured that the bear spray wouldn't help much because if the bear was close enough to spray, it was already way too close!!!  Do you know what I mean?  Well, I guess it does work, so I hear...We headed up in the late morning after stopping at the Gibbon River.  As it was a little ways up the road and with the construction going on,  we hoped that it would be worth the trip.  It was!!  My friends got started before me on the river...which is pretty usual as I am a lagger! 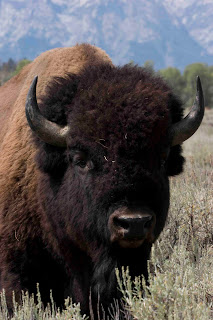 So, I am getting changed into my waders next to the car when I look in the side mirror and see this rather large bison coming towards the vehicle behind me.  Now, I know not to harrass or get too close to Mr. Bison.  I have seen them many times before on the roads up there.  So, I figured that I better get inside and wait until he passed and was on his way down the road.  While intently observing this animal, I was amazed at the massive body.  I waited for Mr. Bison to change his direction and go across the road and up a hill before getting back out! You bet I did!!  He didn't look like he wanted to play Monopoly, you know what I mean? 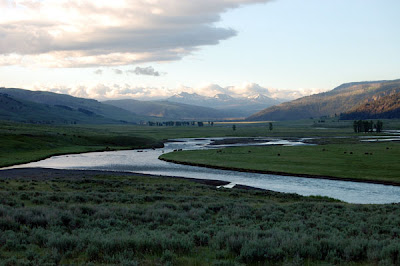 As I got out of the car, I looked down into the Lamar Valley and it was just breathtaking!  A gorgeous place for sure.  It is one of the most pristine places in Yellowstone and probably has the most wildlife to view (from a distance is better sometimes!)  Bison were herding in the field across the road.  Now, there was this "Bear Watch" that I was still a little nervous about.  But, being with friends, I felt some comfort there.  But, I was still going to be mindful of it...  Did you know that bears love to fish too???? 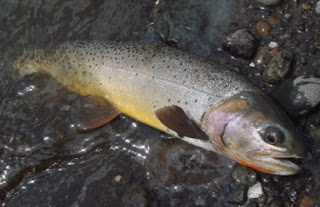 Well...it was time to fish!  And fish, we did.  I brought in a few cutties and a nice rainbow too.  I love the rocks and rills of this river.  Very picturesque.  And there was an added surprise...little ducklings.  They were adorable and very brave!  They were right at my feet in a little pool of water and then, all of a sudden, off they went!  Across the riffles to the other side!  I don't know how they swam across the current, but they did.  It was a rather warm summer day and I almost was ready for a swim myself!  Ha.  A lot of Caddis and PMD's...hoppers as well.  Darn it all, if I didn't have one of those Lamar River Chernobyl's on hand!  I hear they are the ticket...As you go towards the canyon, it gets rockier and a little more treacherous.  But, the fishing is great.  Heaven on earth is here at the Lamar.  The river has deep pools, runs, and undercuts that are packed with native Yellowstone Cutthroat.  The Lamar''s upper end has few fishermen, as you can tell by the way the cutthroat rises slowly from the bottom of a deep pool to snatch your fly!  A few more bears, wolves and animals with teeth also! 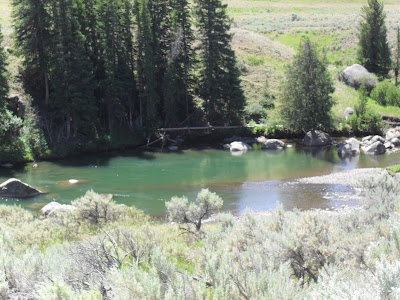 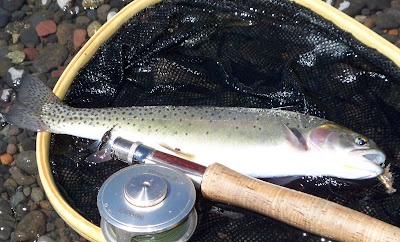 So, we didn't go too much farther up,  as we had excellent fishing where we were.   The heaviest fished section of the Lamar is between Soda Butte Creek and the canyon.  There is a wide open valley of about 7 mi.  Even though it has the most fishermen visiting that part of the river, it has excellent fishing.  The stream has some large boulders, plenty of riffles, runs, and lots of pocket water.  We fished in deep pools too...we loved it all!!  Trout in this section and the lower canyon section, where we were, are mostly cutthroats averaging from 12-14 inches and some up to 18-20 inches.  There are also some rainbows and cutbows on the Lamar closer to the Yellowstone River.  The river is just the right size for fly-fishing, big enough to hold large trout, but small enough so that even novice fishermen will have a pretty good idea where the fish are holding.  And the sunsets...ahhhh.

Well, I am happy to tell you that even though I was looking over my shoulder most of the time for that bear that they told us about, there was no sign of him anywhere...  Or maybe he just hid well!!  I just had to put up with my friends who thought it was funny to make "bear noises"  at me...RRAAwwrr!!! 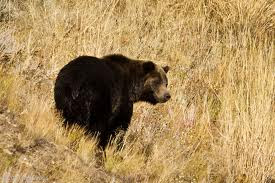 Footnote:  The fishing season in Yellowstone runs from Memorial Day to early November, but the best time to plan your trip is between July and September.  Especially, if you are going to the Lamar...runoff usually takes until middle of July for the water to be at a good level.
Posted by THE RIVER DAMSEL at 12:00 AM