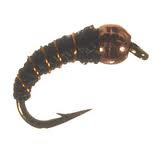 I have to share a very funny story.  The night of Day 2... When we got back into town, we were running low on black zebra midges.  A google + (Social fishing network) friend of mine said that he had been selling flies in a market near the river.  Ok...which town and which market?  We had gone to a few...but, nothing was found.  We actually found one that was called The Market... I walked in and went up to the shift manager, a middle aged woman with a very business like demeanor.  I asked her, "Do you sell flies for flyfishing"?  She looked at me with a perplexed and sort of shocked look on her face.  She answered back, "Nooo, we aren't allowed to have flies since we have a deli over there."  (Pointing)  Huh?  Are we on the same fly page, Batman?   Hmmm, I don't think so!   Without laughing, (Oh, I really wanted to)  I explained to her that I was looking for artificial flies that you put on the end of a fishing line... Oh boy!  Needless to say, they had a perfectly clean deli and no flies for my fly box.  = ) 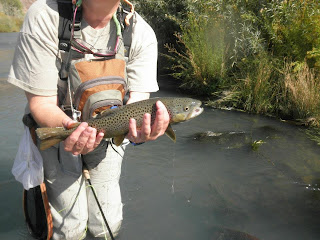 Day 3 began as it did the first two days.  Ice cold water from the dam greeted us as we waded in above our knees to plant a few dry flies on the water.  But, River X was actually experiencing warm weather for October at 80 degrees.  So, the water felt pretty good later on.  There were floating clusters of midges still, so of course I put on my last black zebra midge on the dropper.  As I looked downstream at Jeri already into fish, I had to laugh to myself.  Here is the gal that wasn't too thrilled about getting up at 5:15 am every morning to head out to beat the campers and trucks that would soon be there.  But, now it seemed that it was worth it.  = )
﻿
﻿﻿ ﻿ ﻿

We would soon be found by Rebecca "The Outdooress" and Mr. Outdoors.  They know this river pretty well and wanted us to follow them...  My choice was to hit the pocket water of the "RD's Cliff Hole".  There was only one person parked there, so we made a run at it.  Mr. Outdoors had been watching my poor-a... casting.  He yelled from across the river to give me some helpful hints.  He wanted me to cast over to this group of boulders, but I just couldn't reach it.  The next thing I knew...he was over on my side and handing me his fly rod.  Here came the much awaited casting lesson!!

A lot of people have given me advice, but I'm still not feeling at home with my cast.  After a half hour or so of practice and "loading" up the rod (which no one has ever taught me to do)... The River Damsel finally got it!  Whoohoo!  60-70 ft of line down river...and back up river...it was FANTASTIC!!!  Then, we started targeting spots and I was hitting them almost dead on.  Now, this was fun.  I almost forgot about catching a fish.  I had learned how to cast better than I had ever done before! (3 years of hello???)  I was starting to think that it was my lamo arm... Well, maybe I'm not totally uncoordinated as I thought!  ???  Maybe. 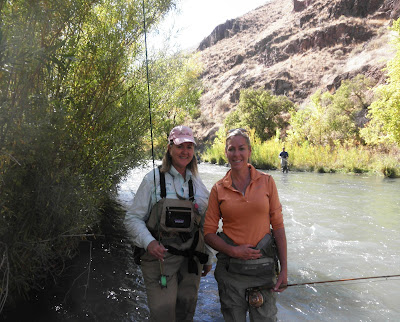 Then, it was time for Rebecca and I to find some big brown trout.  She headed to some nice rocks across the stream.  I had started working my section, when I heard Rebecca shout out, "I don't have my net!  This is a big fish!"  Oh-oh.  I had better get down there to be the net gal.  Now, to tell you the truth, I would have never walked briskly as I did through the fast current to where Rebecca was.  But, the adrenelin flowed.  And I got there just as she was bringing him in close.  There we go!  In the net...
and ready to look purdy for the camera. 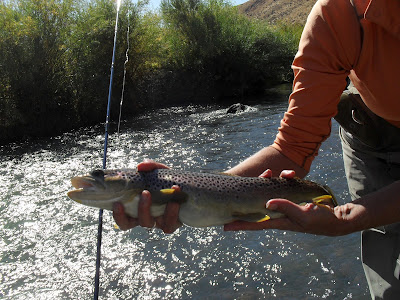 Then came the perfect example of stalking a fish from Rebecca.  No sooner than a blink of an eye, (ok...maybe 10 min) she had the fish she was looking for.  We will call him "Brutus".  The bend in the rod told it all.  We were both screaming and laughing at the same time.  It was awesome!!  I was having more fun netting her big fish than fishing myself.  Great fun to watch someone stalk a fish and land it.  When he came in close... Rebecca was all smiles...  Well, why not? 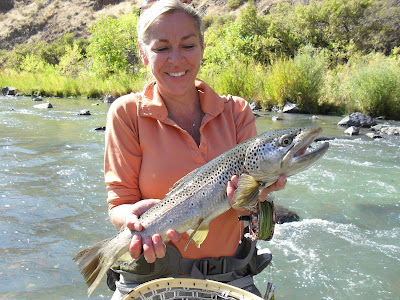 Yeah, we barely got all of him in the net.  This is a RIVER X Brown Trout!! 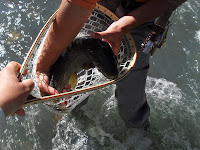 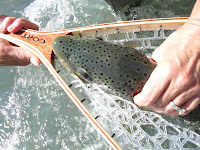 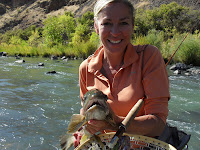 Next up... Another spot in the 10 miles or so of choices.  A nice little dry fly spot that had Mr. Outdoors reeling them in.  And Jeri got a lesson on pointing and shooting for rings of rising fish. 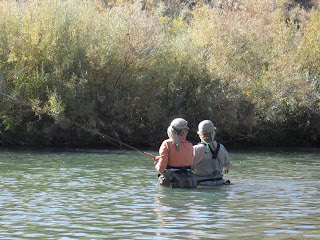 Back to the cars and trying to find one last spot for the day.  As we drove up towards the dam, we passed turnouts that were already occupied.  I knew where we would end up.  It was inevitable.  Yep, the "Midge Run" was where they were headed.  Ok...so, we skunked on that part of the river the last two days.  Try, try again.  A few more "tippets" from Mr. Outdoor on dry fly fishing.  Then, Rebecca came over and said, "I'm taking Emily with me"...  I had a feeling that this was going to be an adventure for sure.  You see, Rebecca doesn't like to see anyone get skunked.  And after my first two days of catching,
I was having a rough time this third day.  Of course, I was having a great day of learning...
and I wouldn't have traded the lessons for anything.

So, I followed Bec down the river to our first spot.  There, I learned how to mend the dry very carefully.  Never knew those tricks.  Then, a few more casts...nothing.  Rebecca exclaimed, "Let's move on"... (She was going to stay with me til dusk to find a fish!)  Haha.  What a great friend to have.  Next run...eh, nothing.  Then, we hit a pocket of large rocks.  Bec was sure that this was going to be it.  We put on a big ol' hopper with a black midge dropper (Imagine that!) and she had me cast over this large shadow of a fish...oh, maybe 25 times.  And he was still there.  Unreal.  Not spooked in the least.  He was a "taunter"!!  And Rebecca Garlock, my friends...does not look kindly upon "taunting" fish!!  We were not going to give up.  Team RG/RD...was into the game...BIG TIME!   As I had my hopper on a perfect drift... Rebecca would say, "Game On"!  And when it went under..."Game Over"!   My hopper finally went under where it should and I set that hook like never before (And with RG yelling in my ear)... The hot pursuit of this one big fish had to have a happy ending... 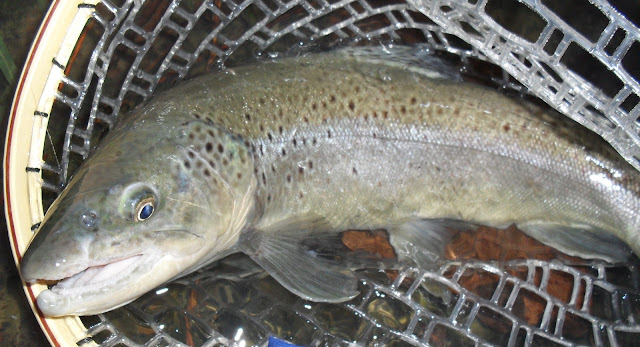 The bend in the rod and the strength to keep with it...was rewarded.  The whole time though, I was thinking that I had better get this guy in for Rebecca's sake!  She had been so patient... = )  After calling him names (which I won't disclose) and finally having him on the end of my line... this was a hard fought victory!
Mr. Hooked Jaw was mine...

So, the "game" was won and it was now getting dark.  The others were waiting on the sidelines and cheering.   We had to take one final picture... Well, who told me to pick up the fish????  (Not anyone) 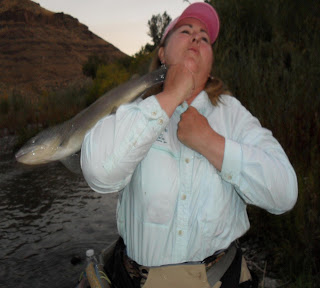 Rebecca couldn't stop laughing after looking at her expert, fast action photography...Thanks, Bec.
Yes, we had a hysterical ending.  I definitely "got schooled".  Have you ever been slapped by a fish?
You might even say that I have given new meaning to "Fly" fishing...
River X... Never a dull moment.  It's always a "REEL" adventure...
Pass the Snickers and  Diet Coke please... 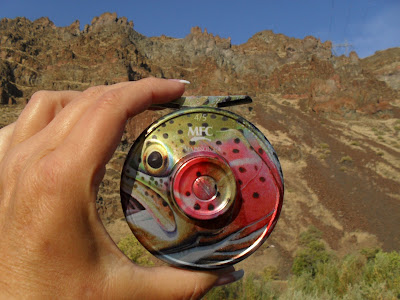