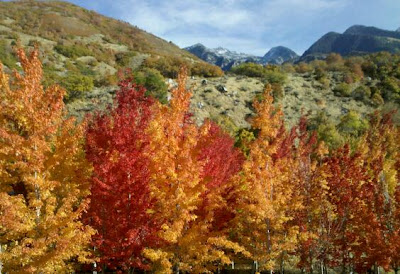 You know that it was going to happen.  Fall is here.  My favorite time of the year.  I absolutely love fall fishing.  The colors of the trout are more vibrant than any other time of the year.  But, along with the crisp, beautiful air and scenery...comes slippery river bottoms and moss.  And one Damsel down!  Oh, it could have been avoided too, if I had listened to the little voice within, telling me that it was time to go home. 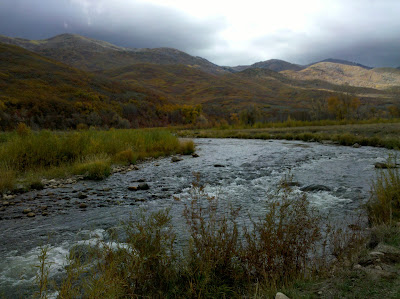 It was a cool 32 degrees when the day started.  I met my friend Jeri at the fly shop and we stopped for breakfast, giving the air outside a little time to warm up!  When we got to the river, it was a dry fly day.  Brown trout were jumping.  A nice BWO hatch took place and the trout heads were rising every five minutes it seemed!  But, would they take anything that I had to offer???  No...  It was a long five hours and it looked like a skunking was upon me.  I kept looking at the overcast sky getting darker as the afternoon came to a close.  I told Jeri it was time for me to head home about ten times!  Seriously.  But, you know... the line goes back in as you walk towards the car.  Finally, I meant it.  Packed it all up and said my goodbyes.  Halfway back to the car, I get a phone call from Jeri saying that she just caught a fish on a dry!  "Come back, Emily"!!!  Ohhhh... What to do???...  I had to get home... I was already running late from my promised time of arrival.  (Nothing new there.  Haha.)  I turned around to try one more time... 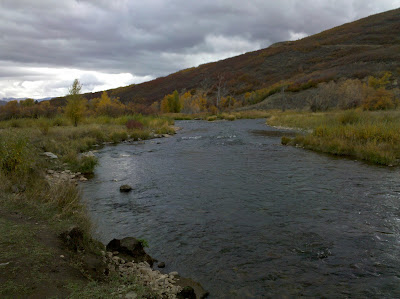 As I turned around my hip pack to grab a couple of flies... Something just told me not to put on a dry.  Yes, the fish were still slurping.  But, it was getting darker and I couldn't see the fly on the water anyway.  And they certainly weren't receptive to my offerings before.  So, I put on my go-to fly anytime during the year... the 22 black zebra midge.  And led by a small hares ear.  I figured the smaller the better since I hadn't had success as of yet.  After another twenty minutes of no bites, I reeled it up and told Jeri that I was heading upstream to our "glory" hole where I can always get into fish.  Don't know why I hadn't thought of that earlier!  (Too mesmerized by the jumpers)  Duh...  Anyway, casting my new Redington 8 ft - 4 wt (btw...the classic trout is on close out) for the first time since purchase... I wanted to have my first fish on it.  I didn't really want to wait until I hit a small stream.  Well, five to ten minutes later, I did. 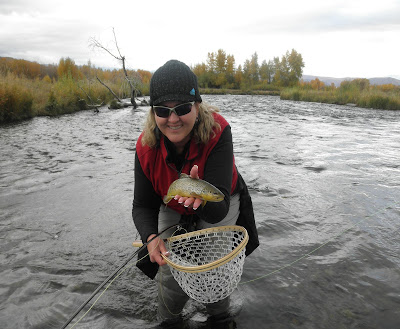 Never Say Never!  I am usually a die hard when it comes to fishing.  Look what happened at River X on the last day... My biggest fish ever as the sun went down.  I don't want this to become a trend however!  But, it does have me thinking that during the winter months...why be on the water so dang early???!!!  Ha.  Seriously, I might as well become an afternoon fly girl.  And sleep in like a few other people that I know.  Lol.  Ok... So, I was de-skunked.  And then it happened.  Couldn't get out without a "splash".  Heck, it is called "Jeri's Fall Hole" for good reason... An epic dunk a few months back.  And now it was my turn.  Silly ol' RD!!  Only a few feet from the bank and slipped on some rocks.  It's a third time for this knee... I'm just lucky it's still intact!  Time to leave... Bye Jeri!!  She said that she would follow me out.  Well, when we got to the previous hole that had given me so much trouble, she stopped.  Oh no!  I gotta get home!  Yeah... you know what happened next.  I had to throw that midge back in...just to end my curiousity.  Even though I was dripping wet and a little bit cold.  Would they take a midge too?  Or would they still be slurping after those silly little BWO's...

INCOMING!!! I would like to think that this was the same guy that had eluded me for a couple of hours...
﻿ 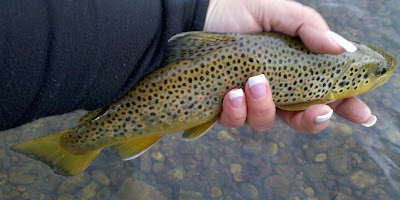 My work was done.  And it did kind of feel like work this day... ugh.  But, still had fun as always. 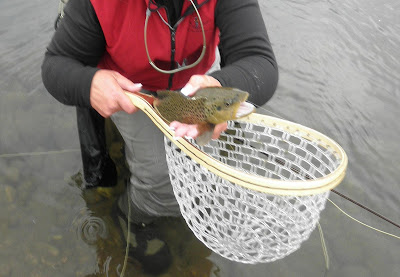 Now, about falling.  I am not alone... Actually in good company!  Mel and Howard, (click for their sad tales) both have stories of their "little accidents".   So, maybe it is a trend of some sort.  Like an initiation into a sport.  If you don't do it... You haven't lived the experience in it's fullness!  Is that it?  Ok... It makes me feel better thinking that anyway.  So, here is a "tippet" for those of us who have "fallen"... So to speak. 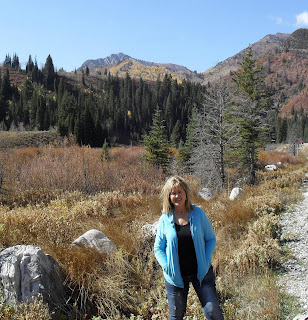 Sunday Tippet:   Vitamin D has helped prevent falls in older people.  As we get older, we don’t get enough vitamin D – either from diet, supplements or sun exposure – And we may be at increased risk of developing mobility limitations and disability.  Could this be me???  Maybe... I am in those "middle years"...  But, I know that I need to drink more milk than I do.  Correcting low levels of vitamin D has been proven as a potential means of reducing falls and increasing mobility.  My doctor has actually put me on a supplement recently.  Maybe that is why my knee is still intact after this fall!  My bones are getting stronger.  Now, how to not fall in the first place... Ha!  (Born naturally clumsy, I'm afraid!)
Posted by THE RIVER DAMSEL at 8:29 PM