Between A Rock And...Well, Another Rock!

﻿ I'm back!!! Wow... What a terrific time I had on my birthday weekend in the Henry's Fork, Idaho area and the Yellowstone Ntl. Park... Maybe I am fish crazy. Maybe. In four days... I fished the Henry's Fork, Box Canyon, Harriman, Gallatin, Hebgen, Lamar, Yellowstone, Soda Butte, and the Madison... = ) 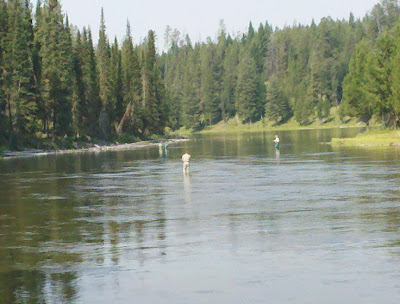 Leaving Sat. morning at 3:30 am and arriving around 9:30 am.   (An unneeded emergency Walmart stop halfway through the journey to buy a cassette adapter for my Ipod which wasn't in the plans)  Sometimes it doesn't pay to buy cheap... I bought the better one this time.  Anyway, I found a couple of fly shops in Island Park, got some questionable half-decent advice on what was fishing good.  Then, headed out with my maps and gear to the Henry's Fork - Coffee Pot Campground section of the river.  A new part of the river for me... And where I ended catching the most fish on my trip!  Walked about 15 min down the river from the crowd and found my "Peace on Earth!! 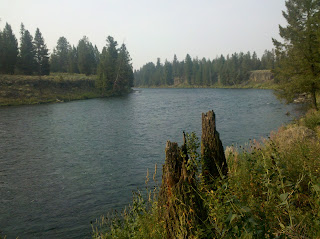 The Box Canyon of the Henry's Fork was up next.  I had some time to burn while waiting to meet up with friends later that afternoon. 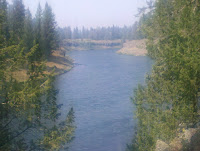 The smoke from the fires on the other side of Idaho made for some hazy pictures...
And one more river to sneak in during the afternoon... 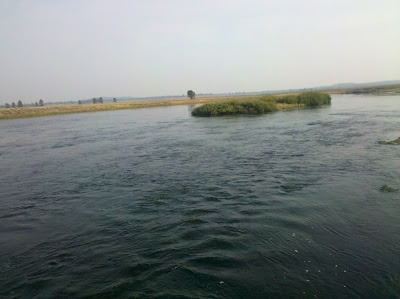 The most technical river that I have ever fished on...and super smart fish that just know what an imitation fly looks like...  But, it's a lot of people's favorite water due to the competitive nature of it.  The Harriman Ranch of the Henry's Fork.  Of course, one more skunking on this river told me that I can skip it next time...haha.
It was time to get cleaned up a bit...(No, I don't wear waders into restaurants...well, most of the time, anyway!  Lol.)  Met up with my friends for a birthday celebration and had a great evening out.  It was so nice of them to make reservations for the "Party Room"...don't you think???   = )  Doesn't Chucky say, "Where a kid can be a kid"??  Well, that would be me.  Ha! 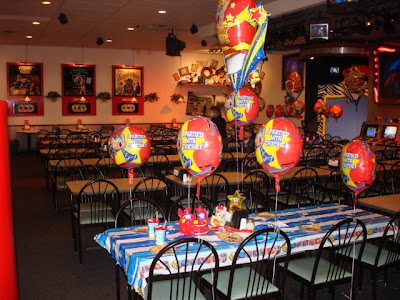 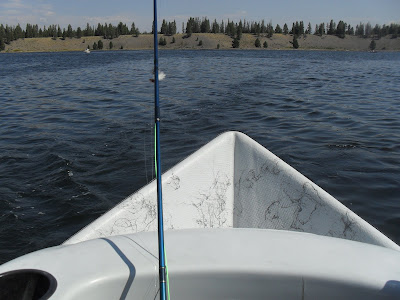 We headed out early the next morning for a "drift" across the Hebgen Lake in Montana.  It was a beautful, scenic lake and I learned how to cast a little farther!!  (Fish don't like coming up close to boats you know!)  So, I had no option than to haul my cast out more than 20 ft...  = )  Heehee. 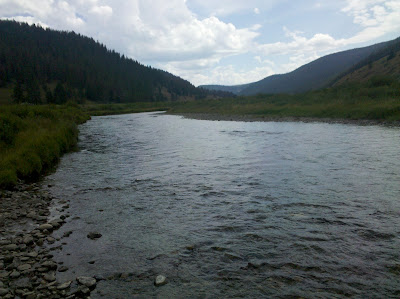 ﻿﻿
﻿﻿
In the afternoon, it was time for the Gelatin Gallatin... I have always wanted to fish this river, so a dream come true.  It is one of the finest wade fishing areas in Montana. Many of the fishing scenes from  "A River Runs Through It" were filmed in the Gallatin Canyon,  south of Bozeman and north of where we were.  A great river full of cutthroats, rainbows and browns...

One of my buddies caught this beauty...
Another day ended...but, it was one to remember. 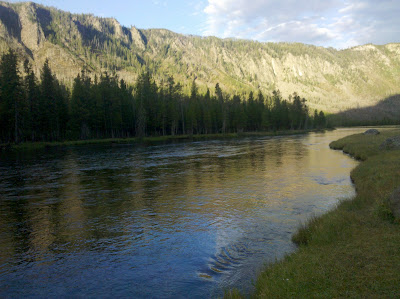 Yellowstone was on the agenda the next day.  I always love photographing the Madison In The Park... Now closed, due to warm water on that side of the park.  So, no fishing there. 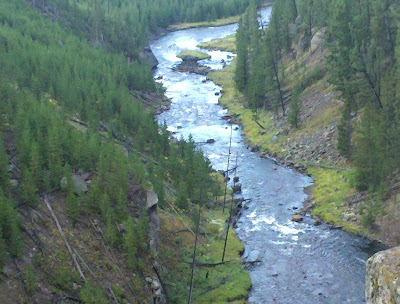 Another river passed... The Gibbon below the Falls.  Incredible sight. 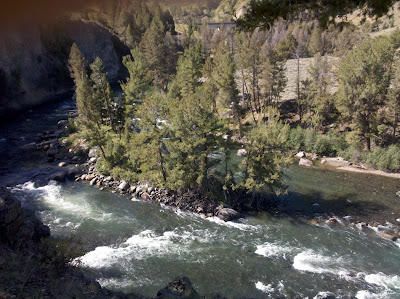 All of us were anxiously wanting to get to our destination...the Lamar.  But, a surprise stop was in my future... The Yellowstone River!  Can you say "BEAR COUNTRY"???  Ok, so my friends tell me of a time that they saw a bear in this particular section... I could have done without that story!  The bear spray was quickly attached around my waist and we headed down the trail to the most beautiful river I have ever seen!  The trail down was...errr...interesting.  But, the river was worth it.  It was breathtaking!  So much variety of water...riffles, runs, pools, and pockets. 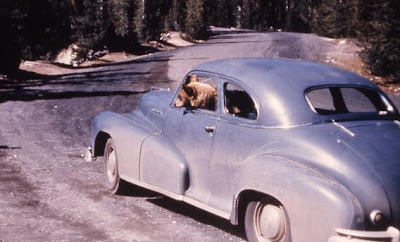 Of course, my head kept turning to check what was behind me.  But, as I glanced up the trail through the pine trees that we came down... I figured it didn't matter.  I would never be able to out run anything back to the car anyway!!  Might as well enjoy the river and not worry about it. 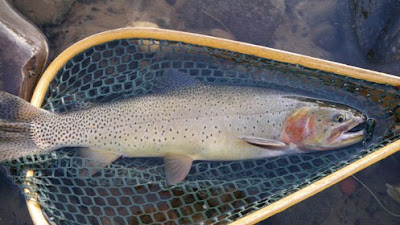 My nicest fish came out of the Yellowstone... but, the picture above is the 2nd place entry.  Of course, in River Damsel fashion, the "big one" was in the net and as I handed the net off to one of my friends and he returned it to me in exchange for the camera,  the Yellowstone Cutthroat flipped out of my hands and back into the river.  A true disappointment.  But, he is now a fond memory in my mind.   He was a fatty which was almost bigger than my net.  Fly fishing in the Yellowstone River was an amazing experience!  I will be back! 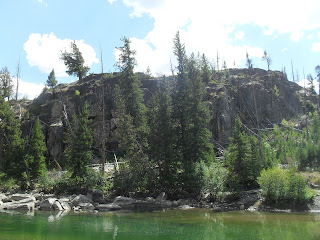 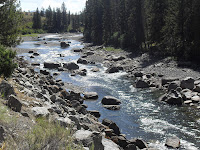 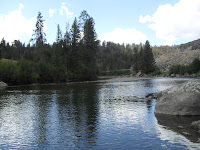 We finally arrive at the Lamar.  One of my favorite rivers to fish.  (I have a lot of favorites...let's be honest)  But, yes...I love the Lamar.  It's emerald green water is a sight to behold.  Ok...so, now we come to the beginning of what's behind the title.  What makes the Lamar so beautiful is the boulder rock placement.  And I felt them.  I am sporting two, big, bruised knots currently...one on each knee.  I couldn't just fall once.   Well, who wants to be uneven???  It's all fair game when I step into the river.  = ) 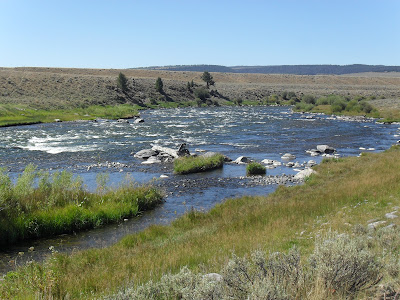 The last river to visit for this day was in the very north east corner of the park.  Soda Butte.  Now, I have had many friends tell me that this is the best water in the park.  So, I was anxious to see what it was all about.  We still had an hour or so of daylight to cast to a few, hungry trout.  It was a different feel, for sure.  Sagebrush greeted us and a walk through buffalo country... Well, and bear country...but, at least you can see them running at you!!  Right???  Heehee.  My personal vote... The Lamar still. 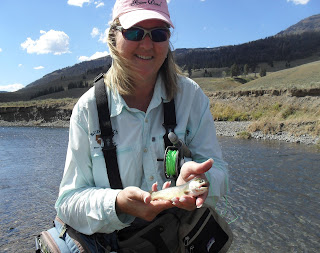 A smaller Yellowstone Cutthroat to end the adventurous day!  I will admit...I was starting to get tired. 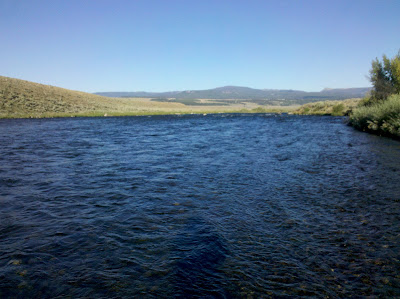 Well, it was quite the journey... Three days and eight rivers/lake to make anyone's head spin!!  I was planning on leaving for home early the next day.  But, the Madison was calling my name.  It was only a half hour away from my hotel.  If I had left, I would have been kicking myself all the way home.  So, you know...

I made it four days and nine different waters... The Madison would be the perfect ending with the only brown trout catch all weekend.
UNTIL...
I got my big foot stuck "Between A Rock And...Well, Another Rock"!  How do I do these things???  Unfortunately, I was fishing alone on the Maddy... And I had been climbing over rocks the whole morning.  So, let's chalk it up to exhaustion.  Moral to this story.  Know when to call it quits!  But, I did find my first brownie on the trip.  As I was trying to find the best way out of the river, my foot slipped between...two rather large boulders heavy rocks.  Now, if your foot slips down, shouldn't it come back up?  No.  I tugged for about 10 min.  Nada.  I had my Simms BOA's on and managed to pop out the dial to release the wire laces finally!  After pulling this way and that, my foot wouldn't come loose.  Ok...I was starting to get ticked now.  My fears were now overrun with being perturbed with the whole situation.  My only way out of this was to move the one rock enough to raise my foot and leg out from underneath.  I don't know how I mustered my non-existent strength.  Maybe it was one of those adrenaline rushes... That must have been it!  The rock finally moved enough for me to pop out of my boot.  But, of course the boot was still stuck.  I wasn't going to leave my somewhat new boot behind.  Another ten minutes... I pulled this way and that until the boot finally gave way to the friction underneath the water.  Yes, it was time to go home. 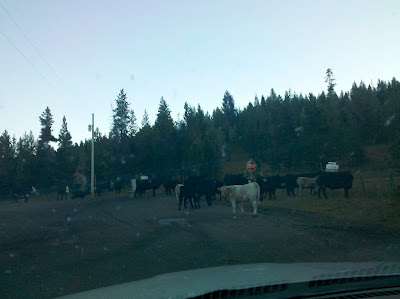 Well, after these guys gave way for me to turn right at the stop sign!!
Posted by THE RIVER DAMSEL at 6:03 AM