Yes, you have that right...So many adventures in a fishing day with the River Damsel.  The day started early.  Ok.  Very early. This voice kept telling me to go back to sleep.  It was my day off already...But, like clockwork, my feet hit the floor and I was headed out for another journey.  My haste to get out of the house, caused me to stop for some breakfast at McDonald's.

﻿And as luck would have it...as I was stopped at the end of the driveway leaving, a not so attentive driver of a F350 plowed into the back of my car.  The blunt force made me shutter at what it might look like.  But, I was lucky...just minor damage.  The policeman was cordial...even asked me where I was fishing.  Ha.  Now, the wind had really picked up and I don't know why I didn't see a sign of going home at this point.  But, I agreed with Mr. Heber City Police that fishing might make my day better...Who am I to argue with the law? 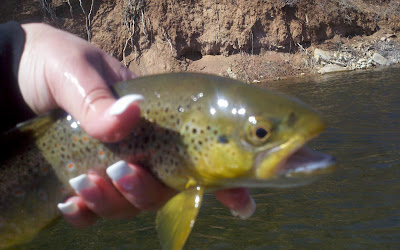 So, we were on our way!  I made a turn into the parking lot that I had planned on going to the night before.  Hmmm...Six cars already.  My gut feeling was that I go across the street instead.  The wind was really blowing...about 25 mph at least.  And tangled lines are not my favorite thing!  But, there is a cliff wall over on the other side of the river that sometimes protects the water a little more from wind.  So, that is where I headed.  So far this winter, I have tried this deep pool about 5 times and it has not brought one fish to my net.  I could go upstream where everyone else is...no.  Why do that?  I wanted to land a bigger fish anyway.  And there are some butes in there!  My friend pulled out a nice 20 incher a month ago.  So, I tied on a BWO for the top and put on a Beatis Nymph on the bottom.  And twenty minutes later...Bam!  And again and again!  I couldn't believe it.  Each time they were biting at the nymph.  That was ok.  My last fish finally took the BWO!  Hallelujah! 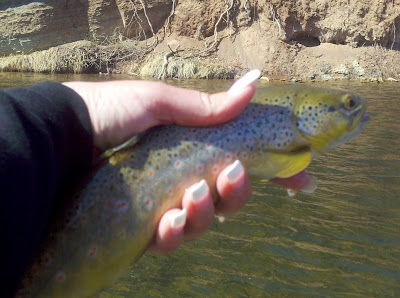 As my rod bent 8 different times...in a short 2 1/2  hr hatch of BWO's...I was absolutely delighted.  I even forgot about the bumper I left on the other side of the fence.  Where I had such a tough time catching anything last week in a thick hatch that was really too much of a good thing, now I was watching my BWO cruise ever so lightly down the path of a few friendly companions.  I am far from knowing how to repeat this day...but, I will definitely keep trying.  And I made someone happy when I turned downstream to tell him he could have  my "All Browns, All The Time"  fishing hole.  Share the wealth, I say! 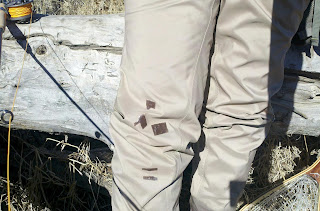 So, today was the Good, Bad and Ugly.  Let me explain...The good was that I had my day with the brown trouts!  The Bad was being in a bumper car and losing the battle.  The Ugly...well, it's definitely not pretty.  It seems that my Patagucchi waders that were patched from a recent debacle, sprung a new leak in the other leg. When I got back to the car...my suspicions were proven right.  A boat load of water emptied...ahhhh!  I must have had a small tear in the other leg that we didn't see...I did fall on both knees.  I guess that the bright side to this story is that both sides will match with tape!  I'm so cool.  Haha.
Posted by THE RIVER DAMSEL at 10:34 PM