Where and when did the Angels go wrong in their early years?  Well, in my humble opinion, one of their worst decisions was to let their fast pitchin' ace, Nolan Ryan, "The Express", get away in free agency...Yeah, like they didn't know that he would be in the Hall of Fame someday!  Oh, how I loved to watch him pitch!   I saw many games where we would count his strikeouts like they were flies at a picnic!  I was fortunate to have a childhood where the family enjoyed the "outdoors", but at the ballpark!  Anaheim, CA.  Home of the ANGELS.  Oh, they had their struggles.  Too many to count.  The 70's were hard to sit through a whole game sometimes.  Until the mid 80's, things didn't get too much better. Have you ever seen the "Bad News Bears"??  Yep, many a night we would look around in the 9th inning and only a thousand of the original ten thousand were still sitting in their seats! (They now pack the stadium of 45,000 capacity.)


When we had an extra seat with our season tickets, I could always find a buddy from school who wanted to go... ; )  Got tickets, let's go!  We would chat with the players before the games as they were warming up.  During those years, that was maybe more fun than the game...Ha!  Section 124, Row G, Seat 1.  I loved the aisle seat, as I had the best view of what was going on the field and in the stands!  My other favorite player was Bobby Grich...All-Star Second Baseman and Golden Glover... He was one of the single guys on the team at the time... : )
﻿ ﻿﻿ ﻿

﻿﻿
﻿
After we moved to Utah, they got better, of course...in fact...2002 World Champions!!  Whoohoo!    But, let me go back to the one, the only, Nolan Ryan.  I watched many one hitters, two hitters...missed the no-hitters.  But, I was there for many record strikeout performances which were also exciting!  I would sit with my scorebook and love to jot down the "K"'s...I think that I had a record of 3 years in a row that I had a "listening streak" and never missed a game on the radio or being there live.  And I would even keep a scorebook at home as I listened to away games.  Crazy?!  Yes.  But, when I do things, I do them full hilt...anyone that knows me, will tell you that.  Ha.  No half-way job on anything.  Maybe that's why I'm afraid to get into fly-tying...I might never stop! 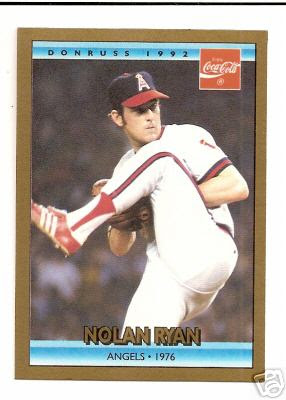 Anyway, when my last boy was born, I named him after Nolan Ryan...he is now 15 yrs old (6'5, 220) and has quite the stretch at first base.  My "Ryan" always laughs when I tell him who he's named after...but here is the story.  After my teeny weeny baby boy was born...all 10 lbs 1 oz, 22 1/2 inches (yes, it's true), I knew that his name had to be Ryan.  My husband understood this had to be the case too.  Ha.  My dad was overjoyed, of course.  I think that it was almost Christmas and my dad came over to the house to give me an early Christmas present.  I opened up an 8X10 glossy Nolan Ryan photo signed by the man himself!  What made it even more special was the inscription..."Happy Birthday Ryan!"  How cool was that?  My dad had a tear in his eye, as did I.  Ok, the tears flowed!  My husband just looked at us like we were nuts...well, maybe we were!  (past tense)  I asked my dad how in the world...and he said that he mailed a letter to the Texas Ranger organization where Nolan Ryan was employed after he retired.  They forwarded it on to him.  In the letter, my dad told Nolan Ryan that we had been to many of his games and loved to watch him pitch.  Then, came the baby story and the name thing...and wallah!  A response back.  It was indeed special.  Not every kid can say that he has a story like that...so my son can laugh all he wants... :)  Wait until he becomes a major leaguer and some kid wants an autograph from him!  So, there is a little bit about my childhood and how I started my life "outdoors".  A little different, I know.  But it was good.  Very good.  Now, I fish...and I don't keep score!
My Sunday Tippet for this week:
Perseverance and determination...pay off most of the time!  Did Nolan Ryan put in countless hours of practice and hard work towards getting to where he wanted to be?  You bet he did.  He also had talent to boot, but without his determination, he wouldn't have had the same results.  He wouldn't have thrown 7 no-hitters!  Whatever you want do in life...if it is something you really want to accomplish...you have to give it the old college try!  You have to dig in with all your heart, might, mind, and strength to make it happen.  If you don't, you might never know.  Don't wish that you had done it years later.  Where there is a will...there is usually a way.  And that ain't no curveball...just a fastball down the middle!!