Five days later, my anticipation for a great adventure turned out to be an EPIC adventure.  When you go on a journey with a few friends to an annual river retreat of sorts, you expect to have a good time one way or the other.  I mean...  Fish, Friends, Food, Fun.  What more could you ask for?  Nada... 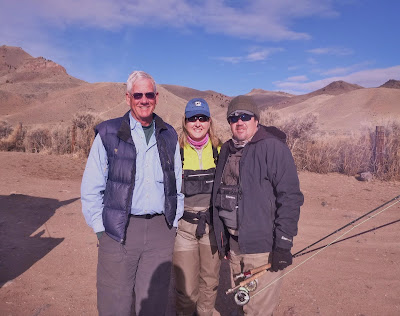 The "Epic Holiday" adventure takes place on the Beaverhead River, MT.  It starts with Maynard and I picking up Ernie and his son, Leroy, about halfway to our destination.  A soon to be 18 year old Leroy is a new addition to  "Team Trouble" (as the fish call us)  and he has no idea what he is in for... or should I say that the fish don't know what they are in for.  There is no stopping any of us... even though it is a COLD week... 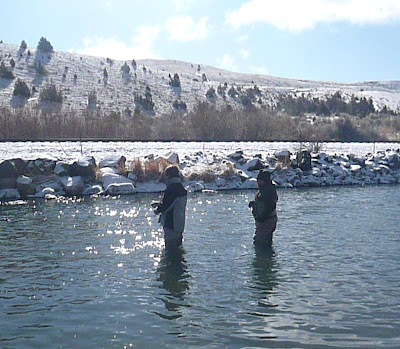 As this is the third trip out for Leroy in his early fly fishing journey, we sit back and watch his dad, Ernie, give instruction.  Young Leroy is a quick study.  He learns the lob cast and picks up a quick ten in the net.  The first day is a short one, as we only have the late afternoon hours after traveling.  But, no worries!  We all hook up to a few browns and rainbows.  A great way to start the trip. 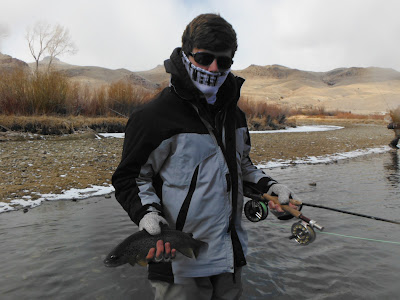 I'm a little concerned about Leroy and his laid back approach to catching fish.  I mean, RD always gives a hoot and holler everytime a fish hooks up!  Lol.  But, young Leroy is more on the quiet side and very politely says "fish".  Papa Ernie brings over the net to bring in the next fish.  This goes on over and over again.  Almost 20 fish netted in a couple of hours between the three of us with Ernie getting in a few between saying "mend!" and "set!" to Leroy.   A good start.  Day one ends with a fine dinner at Blacktail Station in Dillon. 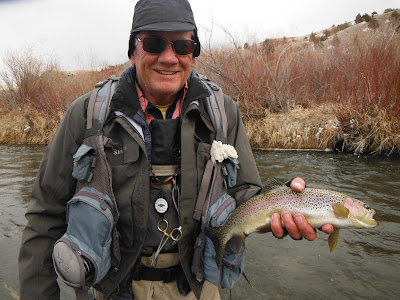 On Day 2, Maynard finds some action in a hole that we affectionately name, "Slaughter Alley"...  It was originally named "The Crime Scene Hole".  I guess you get the message!  It was unbelievable.  When you thought that maybe it was fished out... And we all had plenty of turns... It just kept delivering up beautiful 16-20 inch browns and rainbows.   We did fit in a nice lunch fixed on the bank by ol' RD.  Homemade meatloaf sandwiches were on the menu.  Mmmmm... 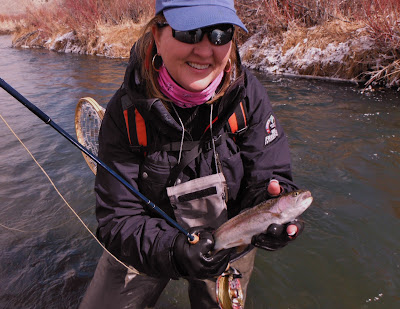 As a group, we pulled out over a dozen fish in that hour and a half in "Slaughter Alley".   I went for a triple species with a rainbow, 2 brown and a 5 lb ....whitefish (yeah, it figures). Here's my bow.   I had a smile that stretched across my face!  This is catching, not fishing!  A heck of a lot more fun...  This part of the river rocked, needless to say.  And Leroy just kept saying, "fish" everytime he caught another 16 inch trout.  No "Incoming!", "Fish On", " Oh, Yeah, Baby!"... Just, "fish".  (No exclamation point) 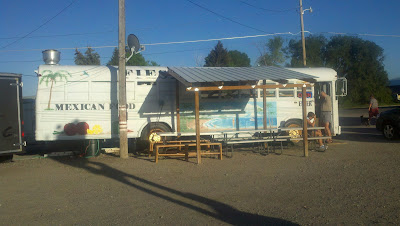 At the end of the day, Maynard and I won out on going to the Taco Bus.  Ernie always gets out voted... poor guy.  We are all tired at the end of Day 2.  And macho burritos and enchiladas de crema are a perfect way to satisfy the hunger pangs. 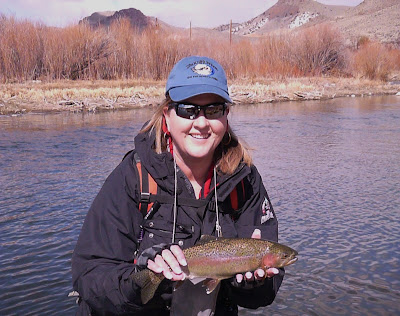 Day 3 starts with young Leroy not getting out of bed in the morning... I understand that about teenagers!  (He might have been a little under the weather from over exertion as he did catch a heck of a lot of fish the last day and a half! Ha.)  So, the three amigos ventured back to the river to find some new territory.  All I can say about the next stretch of water was that it was loaded with fish for the taking.  Unbelievable?  Yeah.  It rocked the house.  I think that it was only a few casts before I had one on.  And another... and another...
﻿ 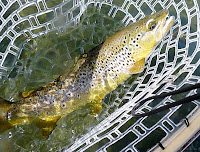 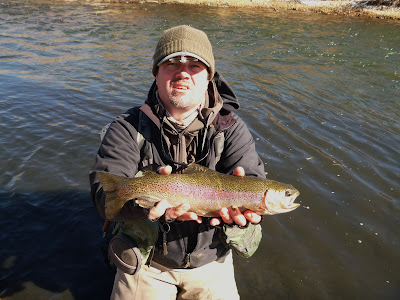 And Ernie who named the water, "The Nursery", must have forgotten about this catch!   Maybe the name should refer to how many were in there instead!  It was a 20 + catch day for Ernie too. 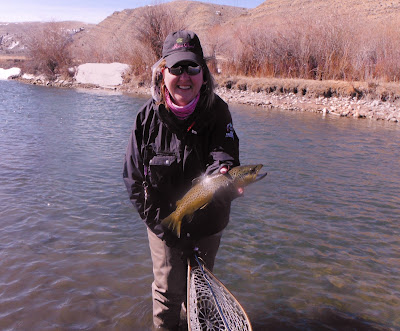 Yep, RD is still smilin'!!!  How do you like my "baby"???  I guess that the best thing about this trip was that I only needed two flies.  A crane and a midge.  I threw them for five days!  And they delivered!  I've never seen anything like it.  I kept smiling even after I lost my net.  Two years in a row on the same river.  What's up with that?  Well, if my net is a sacrifice to the "fishing gods" or a new owner, I can deal with it. 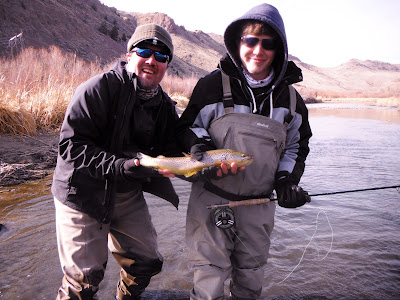 Day 4 brought back Leroy.  He had to experience "The Nursery" too.  And I just kept rolling my eyes watching this kid bring in such beautiful trout.  He was simply amazing for his third time out.  Heck, he will be outfishing me in no time!  A great young man too.  So, as he said in his laid back way, "fish"... I gave him a new nick name.  "Ho Hum Leroy".  Just another fish at the end of his line!   He made it look so easy.  And Papa Ernie was just a little bit proud. =) 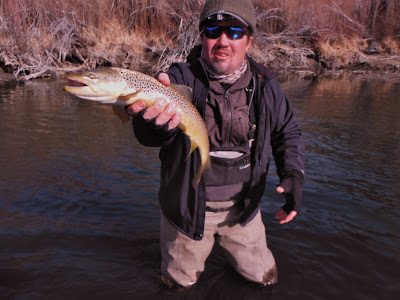 Of course, Ernie had a few casts of his own.  He landed this little guy.  Hey, wasn't that the one that I was after???   A steak dinner was on tap after another epic day of fishing catching.  I don't know why being on the river all day makes you sooooo hungry for a salad, baked potato and a hot, juicy steak!  But, it does.  And no, they couldn't get me to partake of the appetizer of the night...Rocky Mtn. Oysters... heehee. 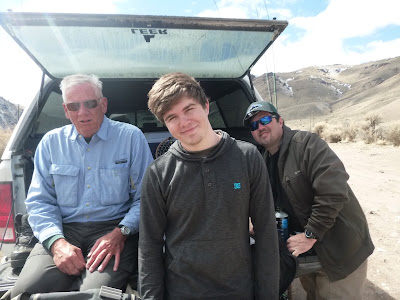 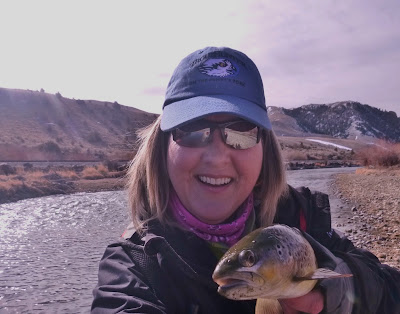 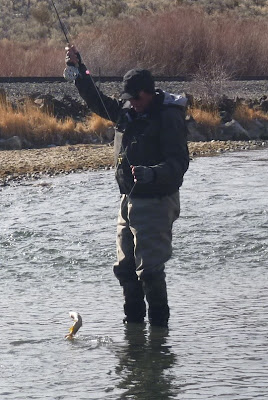 "Incoming" trout for Maynard.  He also gave me some very useful tips on casting. 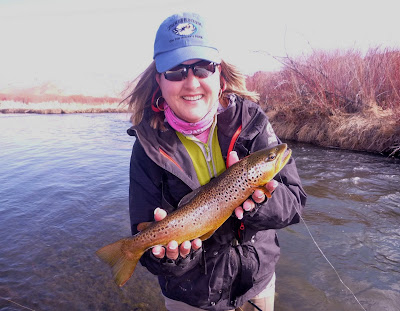 And my favorite catch of the EPIC Holiday! 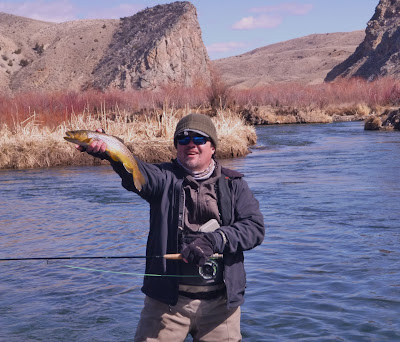 After Ernie helped me on my "mending", he took care of business.  Ernie's favorite slab to end the the trip... It was time to head home.  It just didn't get any better than this.  At least 6 double hook-ups during the trip.  Well over 100 fish caught, even though we took time out one day to search for the "Holy Grail" on a sight seeing trip.  (Won't get into that one...ha)  Each of us had a rainbow over 17 inches.  And the browns had size, color and gorgeous halos.  You just can't ask for more than that. 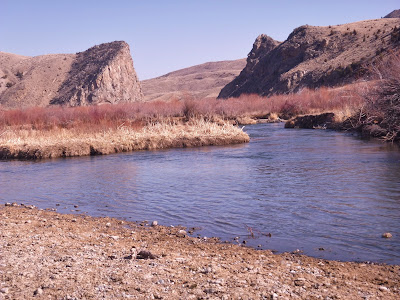