Judging by the amount of press that fly fishing for carp is now getting in magazines, many fly fishers are finally starting to see the merits of pursuing Cyprinus carpio. While many among the angling masses still look down on the noble carp as being a "garbage fish," there are others who have seen the light. No, not "that" light, the one containing neither Elvis, nor the light from the mothership during alien abductions, but the path to angling nirvana. Honestly, it's hard to beat a fight with a carp on a fly rod!  And how do I know???  It was another "Adventure In Every Riffle" today...And I took great pride in it.  So no one laugh at me... = )
Editors Note:  It has now been determined that this is a UTAH SUCKER...but, I will let this story ride...  distant cousin?

Trying to repeat my epic day on Saturday...I went back to the same stretch of water on "Fish Tuesday".   I first landed a brown trout, then a white fish, and then...HOLY C%#P, BATMAN!!!  What was on the end of my line?  A huge tug, then a pull...then whatever it was started running upstream like a turbo jet!  As my heart pumped thinking that this was it...the mega million dollar brown trout...my line was reeling faster out than I could handle.  Oh no, you don't!  No way was this prize going to get away... I eventually got my rod to turn across stream to get a better angle and to lure him back into the fold.  This was palming the reel at it's best.  What seemed like an eternity was actually probably 15 min.   And there he was...my beautiful...brown...errr...wait!  I see a pink stripe on the side.  Could it be the biggest rainbow that I have ever caught?  Ugh...no.  I'm seeing scales here.  What the heck.  It's not a white fish.  Nooooo....
A CARP?????   Editor's note: (Or could it be a SUCKER????? ) 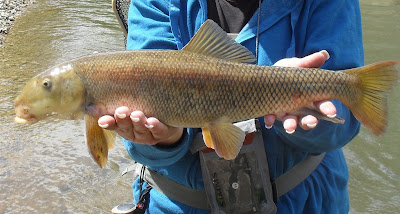 Why was I just a little excited about the weirdness of catching my first carp?  Partly because carp are harder to catch than other freshwater species, from what I have been reading. (with the exception of redhorse or gar pike)  And carp are supposed to be picky, finicky, spooky and far more selective than any trout you may encounter.  So, I am not ashamed...not a bit.  It was cool.  Yes, it would have been nice to see a monster rainbow or brown down there...but, I had a lesson in bringing in a tough fish and that was worth it. 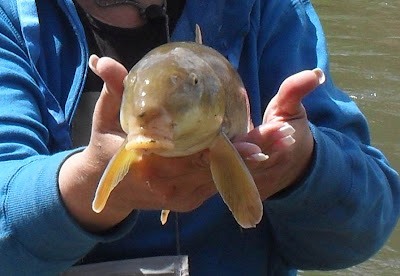 When hooked, even a 8 lb carp (I'm guessing here...probably 25 in) can get you into your backing in a matter of seconds.  I was really shocked to see my line go freaking wild before I started getting it under control.  I can't say that a brown trout has taken me to the backing that fast... This hooked carp went bulldog on me and engaged in hand-to-fin combat and left me muttering, "Uh-oh," as I tried to remember where I put the warranty card for my fly rod. = )
Just another "Fish Tuesday"!

Editor's Note:
Chris Cutler (Many A Fish)
One of his buddies with a REAL CARP... 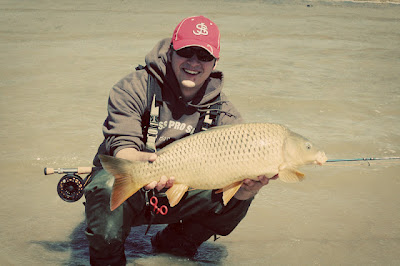 Posted by THE RIVER DAMSEL at 9:10 PM